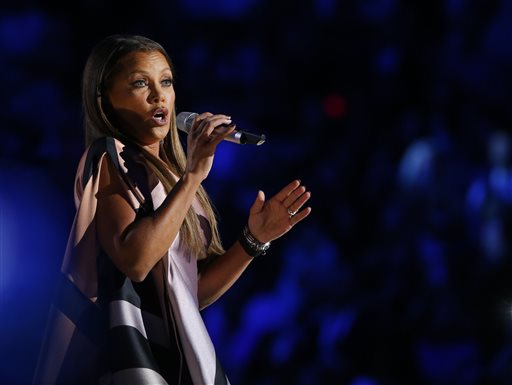 Actress and singer Vanessa Williams sings during in the 2016 Miss America pageant, Sunday, Sept. 13, 2015, in Atlantic City, N.J. Williams is returning to the pageant as head judge for the first time in more than three decades since she resigned the title amid a nude photo scandal. (AP Photo/Noah K. Murray)

ATLANTIC CITY, N.J. (The New York Times) — Betty Cantrell of Georgia was crowned Miss America on Sunday, but an apology to Vanessa Williams stole the show.

In 1983, Ms. Williams, now 52, became the first African-American to win the Miss America pageant. She was forced to resign 10 months later after nude photographs of her surfaced.

She went on to enjoy a decades-long career in TV, film and music. But it was a particular redemption to return to Sunday’s pageant in Atlantic City as a celebrity judge.

After Ms. Williams sang a song, Sam Haskell, executive chairman of the Miss America pageant, apologized for the way the organization treated her three decades ago.

Box Office Report: ‘The Perfect Guy’ Edges out ‘The Visit’ to Win the Weekend