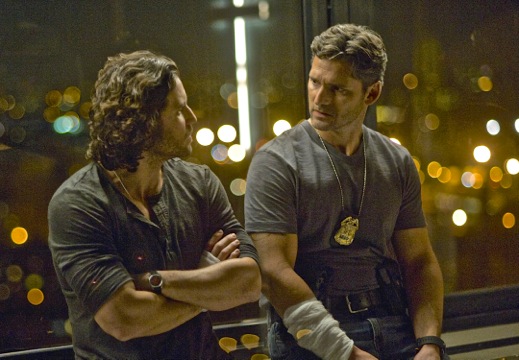 Edgar Ramirez and Eric Bana co-star in the paranormal cop thriller, “Deliver Us From Evil”

What do you get when you mix cop/thriller elements with a paranormal film? Dread, fear, anguish, action, suspense anxiety, curiosity, disbelief, demons, thrills… At first, you might think that this creepy crime movie is just another excuse for a The Exorcist rip-off—but it’s better than that. Better.

Sgt. Ralph Sarchie works in the 46th Precinct in the South Bronx, a rough section of New York City where ordinary crime is overshadowed by inexplicable acts that are just not normal. He works with priests, even aiding them as they perform exorcisms on people who seem possessed by demons. Trying to solve those bizarre incidents wears on his soul. He becomes despondent.

Sound like the premise of a generic cop/thriller/horror movie?  Yes it does. And it would be no more than that, except that phenomena is based on the horrifying circumstances that a real Sgt. Sarchie encountered on patrol. He catalogued his experiences with paranormal activities in his book “Beware the Night,” which was co-written with Lisa Collier Cool. Apparently, Sarchie even became an assistant to an exorcist. His story is a tough sell to skeptics. Hard to believe.  Very hard to believe. But fascinating.

Director/screenwriter Scott Derrickson (The Exorcism of Emily Rose) and his writing partner Paul Harris Boardman based their screenplay on Sarchie’s book, whittling down a string of anecdotes into one suspenseful narrative that has cop story, family drama, investigative thriller and evil mysticism components. For the most part their unearthly concoction is compelling, dramatic, scary and violent. Their craftsmanship will likely not win them any awards (even with all the window dressing, the film feels a bit derivative), but what’s on view is not a regulation B-movie either.  The direction, writing, production quality and acting make it more than that.

Sgt. Ralph Sarchie (Eric Bana, Hulk) and his patrol partner Butler (Joel McHale, TV’s Community and The Soup), a sarcastic ex-Army Ranger, cruise Bronx streets looking for trouble. Sarchie, with his inexplicable, clairvoyant and clairaudio sixth sense, sees and hears things. They investigate a domestic dispute and run across a crazed, tattooed Iraqi vet (Chris Coy) who has been beating his wife.  A chase ensues. They’re called to the Bronx Zoo where a woman has thrown her young son into a lion’s habitat.  When they arrive, she is psychotic, super strong and prattles on incoherently. A mysterious man (Sean Harris) in a hoody appears in the lion’s den, and then disappears. Sarchie and Butler discover that all the events are linked. Their investigation comes under the watchful eye of a Joe Mendoza (Edgar Ramírez), an atypical priest who has fallen on and off the wagon while wearing the cloth.

Scott Derrickson’s pacing as a writer and director is near perfect in a film that takes nearly two hours to tell its tale of unholy possessions. He measures out the violence, gore, drama, chase sequences and devil extractions quite well.  Better than a lot of paranormal movies.  His efforts are helped by crystal clear cinematography (Scott Kevan, Underworld: Awakening), realistic costume design (Christopher Peterson, assistant on The Wolf of Wall Street), a tension-building score (Christopher Young, Spider-Man 3) and scary noises (the sounds of fingernails clawing rocks will give you the heebie-jeebies).  You never question the visuals, the clothes or the sounds. You just get sucked into the fray.

Even if you didn’t know that the footage was based on someone’s actual experience—be it real or just real to them—the urgency in the story comes through in large part due to the performances. Eric Bana has just the right mix of bravura, natural appeal and healthy skepticism. Says Sarchie, “You can’t blame invisible fairies for the evil men do.” Hard to believe that McHale, who acts like a smug jackass on The Soup, can play a believable cop. Sean Harris and Chris Coy as the vets who brought the devil home with them from Iraq are fluidly demonic. Olivia Mum as Sarchie’s wife and Dorian Missick as a fellow police officer blend into their portrayals.

The man who brings real gravitas to the proceedings is Venezuelan actor Edgar Ramirez. Rent Carlos the Jackal on Netflix; it was a mini-series that was released in the U.S. as a 334-minute film called Carlos. His performance in that riveting movie should have won him an Emmy, Golden Globe or Oscar for Best Actor.  He is one of the most talented actors in film today and he makes Deliver Us From Evil surprisingly impressive. He’s intense. He jumps between English and Spanish effortlessly. As the hard-drinking, chain-smoking priest who has fallen from grace countless times, he makes Mendoza almost saintly: “I can’t help you further unless you humble yourself before god.”

This is a smart blend of cop drama, thriller and paranormal elements. It’s a compelling and surprising mix that raises this genre movie into the realms of an imperfect but solid thriller. Fact or fiction. It’s scary and grisly in all the right places.