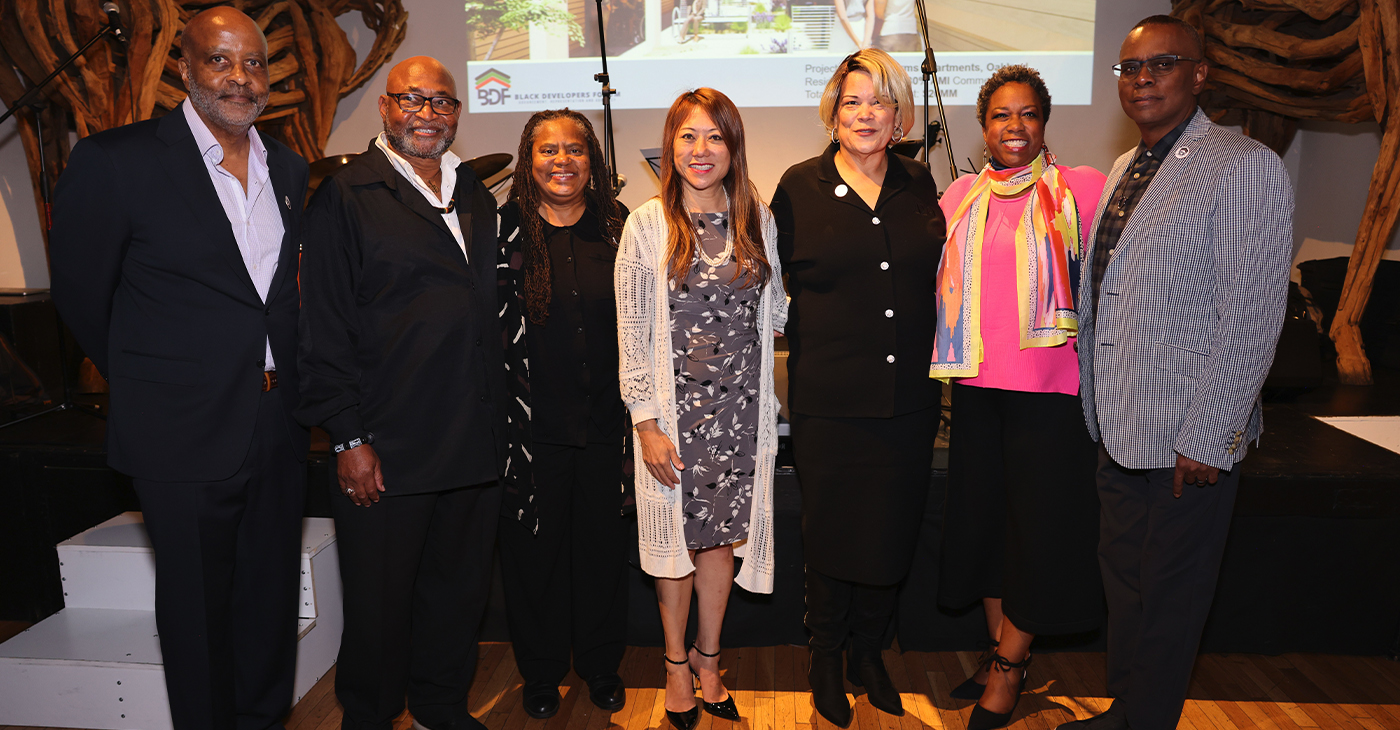 By Marla A. Matime

On October 3, the Black Developers Forum (BDF), held a cocktail reception at the Minna Gallery in San Francisco. A standing-room-only event, many of the state’s Black developers filled the room, to celebrate BDF’s first year as a California-based non-profit advocacy organization striving to eradicate inequities in the development of affordable housing. The event followed the 43rd annual Non-Profit Housing (NPH) Conference also held in San Francisco.

BDF is a network of Black affordable housing developers and industry supporters committed to creating communities that provide safe, healthy living environments, educational opportunities, and housing to people of the African Diaspora.

The reception was also a means for raising money to support the work and advocacy of BDF. The funds raised go to support BDF in creating workshops and trainings for Black developers and industry professionals.

Black developers need allies in positions of influence and decision-making to receive equitable consideration for housing dollars for communities of color. The BDF Cocktail Reception provided a great opportunity to bring these critical parties together.

Keynote speaker, California State Treasurer Fiona Ma, spoke about the BIPOC allocation pool, a $112 million set aside for Blacks and other minority developers which was initiated by former Deputy Treasurer Jovan Agee and created in 2021.

This set aside addresses the needs of minority developers who lacked access to capital and relationships with the major banks to provide lines of credit and other financing products. Creating this allocation pool was a significant priority for the Black Developers Forum and Treasurer Ma.

Ma also explained that without the allocation, Black developers would not only lack equitable access to funding capital, but also be left out of the loop to build affordable housing that addresses a primary goal: to reduce harmful carbon emissions. This would be accomplished through the production and logistics of delivering the materials to the development sites and use of clean energy components that would go into the final touches of building structures.

She went on to specify why these opportunities are important not just for the developers, but also for the communities that they serve. Providing affordable housing, workforce housing, and access to education and resources will help underrepresented communities of color by hopefully inspiring them to become homeowners, which in turn will help pull these families out of a cycle of poverty. Ma is up for re-election on November 8.

“Building back our sustainable communities through a lens of equity is a top priority,” said Cherene Sandidge, president of the Sandidge Urban Group, Inc and president of BDF.

Her passion and drive to ensure Black developers receive equitable opportunities is why she accepted the position to lead BDF. Sandidge also acknowledged partners who were in attendance, specifically Lourdes Castro Ramirez who is secretary of California’s Business, Consumer Services and Housing Agency, who has “had our back since the beginning.”

Don Gilmore, executive director of the Community Housing Development Corporation and BDF’s vice president said “Black-led affordable housing developers have been subjected to the systemic inequities in State funding of affordable housing projects, which created barriers to us receiving the opportunity to build in our own communities. The Black Developers Forum formed to provide us with a collective voice to call out these inequities and positively impact how current and future legislation is shaped.”

He also noted that, “Black developers should have the same opportunities that any other developer has to build great projects that benefit the community, but the inequities in funding and related regulations have been and continue to be a barrier, and we will no longer be silent. We’re using our collective voice and resources to demand that Black developers be provided the equitable opportunities that have eluded us for so long.”

When asked about the responses from the state on equitable policies, practices and laws, Gilmore said, “We have received positive responses from all levels of our government and have been awarded for taking a stand and being change agents for a system of equitable policies, practices and laws. This represents forward progress and we’re happy to be a grassroots advocacy organization whose work will create a system of equitable practices that future generations can benefit from.”

BDF addresses institutional issues that have prohibited wealth-building and the continued disenfranchisement of Black developers, Black-led organizations, and Black individuals. There are over 50 members within the Forum including developers, both in the for-profit and non-profit sectors, as well as from the finance, construction, property management, and other industry professionals.

Further, BDF advocates for federal and state policies that have historically discriminated against and disenfranchised Black developers and Black-led organizations.

A goal that has not been met, and is an ongoing effort, is to ensure that practices, policies, and regulations are instated to allow Black developers and other people of color within the industry, fair and equitable scoring on development applications, equitable funding opportunities, and equitable experience requirements through the BIPOC Set Aside. Additionally, BDF was able to change the CDLAC regulations to allow more Black developers to access capital and create the BIPOC set aside.