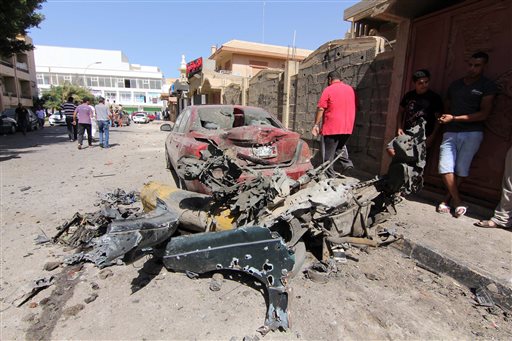 Civilians gather at the site where a car bomb went off outside the building housing Swedish and Finnish consulates on Friday, Oct. 11, 2013 in Libya’s eastern city of Benghazi, badly damaging the building, but leaving no casualties. Benghazi has been hit by a wave of attacks against government offices and targeted killings in recent months as security agencies struggle to secure Libya since the 2011 civil war. Weapons have proliferated and a number of militias have vied for authority, operating with impunity.(AP Photo/Mohammed el-Shaiky)

TRIPOLI, Libya (AP) — A car bomb exploded outside a building housing the Swedish and Finnish consulates in the eastern Libyan city of Benghazi on Friday, badly damaging it but causing no casualties, Libyan and Swedish officials said.

The blast reflected the deep insecurity in the North African nation, where multiple armed militias run rampant — many of them dominated by Islamic militants — and the central government is too weak to rein them in.

The violence is particularly sharp in Benghazi, the country’s second largest city, which has seen frequent killings of Libyan security officials and a string of attacks on diplomatic facilities, most notably the Sept. 11, 2012 storming of a U.S. diplomatic post that killed the ambassador and three other Americans.

The attack comes in the wake of a U.S. special forces raid last weekend that snatched an al-Qaida suspect from the streets of the Libyan capital, Tripoli, spiriting him off to custody in a U.S. warship. Many militiamen and Islamic militants were angered by the raid, blaming the Libyan government — and on Thursday, gunmen briefly kidnapped the country’s prime minister.

Some militiamen have hinted of retaliation against Americans — or other foreigners — but there was no immediate sign Friday’s bombing was linked to the raid.

The Swedish and Finnish consulates are among the few foreign diplomatic posts still operating in Benghazi.

A Libyan security official said the car bomb was detonated by remote control on Friday in the upscale neighborhood of Benghazi. The official spoke on condition of anonymity because he was not authorized to talk to the media.

The morning blast heavily damaged the windows and facade of the building, but there were no reports of injuries, Ursula Ahlen of the Swedish Foreign Ministry in Stockholm said. The facility was closed for business since Friday is a weekend day in Libya.

“All the doors were ripped up by the blast. When I walked out to the stair case it had been blackened by soot,” the former honorary consul, Anders Nilsson — who still lives at the site with his sister, the current honorary consul, told Swedish broadcaster SVT by telephone from Benghazi. Nilsson said he had just returned from morning shopping and was in the kitchen when the blast went off. He said eight or nine people were in the building at the time.

Finland’s honorary consul was also in the building at the time but was not hurt, the Foreign Ministry in Helsinki said.

The consulates perform diplomatic functions like issuing visas and citizen services, but they are headed by “honorary consuls” — nationals who were already residing in the city and were named by their home governments to represent the nations, as opposed to members of the diplomatic corps assigned there.

Foreign diplomats have been repeatedly targeted amid Libya’s continuous instability, particularly in Benghazi, where Islamic militants are particularly strong among militias. The 2012 attack on the American diplomatic post has been blamed on militants believed to be linked to al-Qaida.

In January, militants opened fire on the car of the Italian consul in Benghazi. He was not hurt in the attack. In June 2012, the British ambassador’s vehicle was attacked with rocket-propelled grenades, injuring two of his bodyguards, as he visited the city.

Last week, a mob attacked the Russian Embassy in the capital, Tripoli, climbing over its walls, pulling down a gate and firing in the air, prompting Moscow to evacuate its diplomats and their families. The attack was sparked when a Russian woman was arrested for allegedly killing a Libyan air force officer and his mother.

Libya’s central government has struggled to impose its authority over the country since the 2011 ouster of autocrat Moammar Gadhafi. It has been helpless to rein in militias, which originated as rebel brigades against Gadhafi but have mushroomed into powerful forces of their own while the army and police remain weak, under-equipped and under-paid.

Militiamen abducted Prime Minister Ali Zidan from his residence in a Tripoli hotel before dawn on Thursday. He was freed hours later by another militia.

But outrage against Zidan continues among many Islamists over Saturday’s U.S. raid that captured al-Qaida suspect Nazih Abdul-Hamed al-Ruqai, known by his alias Abu Anas al-Libi. Many militiamen and militants accuse Zidan of cooperating with the Americans in the operation, though the government has denied having any prior knowledge of the raid.

Al-Libi is accused by the U.S. in connection with the 1998 bombings of its embassies in Tanzania and Kenya.

Jan M. Olsen in Copenhagen, Denmark, and Matti Huuhtanen in Helsinki, Finland contributed to this report.