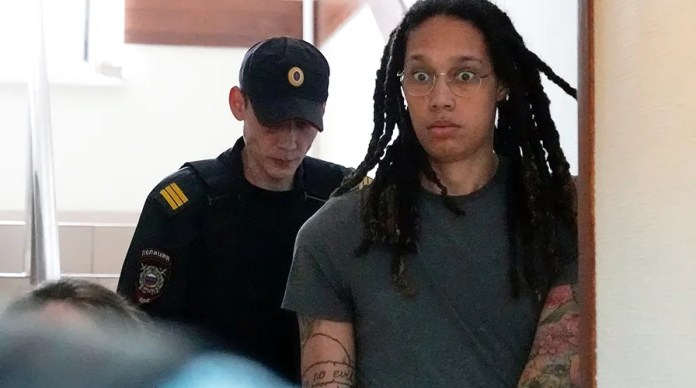 WNBA legend Brittney Griner is led into a Russian courtroom to learn of her trial date. (Photo: Google Images)

WNBA Superstar Brittney Griner will stand trial in a Moscow court on cannabis possession charges, nearly 5 months after her arrest at a Russian airport tomorrow. Griner has been held in jail since being detained without an opportunity to speak to the public or for herself.  Russian airport officials claim they found cannabis oil vape cartridges in Griner’s luggage February 17.  Some pundits argue that Briner is a political prisoner as she was taken into custody shortly after Russia’s invasion of Ukraine. Griner, who plays on Russia’s national team, has lived there part-time for seven years. If Griner knows the laws and hasn’t broken any before, then why would one of basketball’s greatest players do it now, especially in wartime?

In response to a public outcry about Brittney’s case, the U.S. State Department classified the Texas native as “wrongfully detained” by the Russian government in May.”The welfare and safety of U.S. citizens abroad is among the highest priorities of the U.S government,” the State Department said.

Social media influencers and international media called out Russia because no one had seen or heard from Griner for weeks after her arrest. Those claims were buoyed by reports from Griner’s wife Cherelle who said it was difficult to contact the two-time Olympic Gold medalist. Cherelle also said Griner is alone and without help or assistance in the Russian jail. Griner’s oldest sister Shekera made a video plea June 10 to bring Griner home, “safely and quickly.”

Jonathan Abrams and Tania Gunguli of The New York Times are reporting that the trial is an exercise to convict Griner because there is no presumption of innocence in the Russian judicial system. When charged, you are convicted and sent to trial so prosecutors can present evidence and the defendant can be sentenced. Griner faces 10 years in prison if convicted. ESPN’s T.J. Quinn has reported similar concerns about Griner’s bleak options with this trial and that Griner is being held so Russia can trade her for Russian prisoners being held in prison in the U.S.

The Burton Wire will be closely following Griner’s trial which starts tomorrow.

Center for Elders’ Independence Celebrates 40 Years in the Community