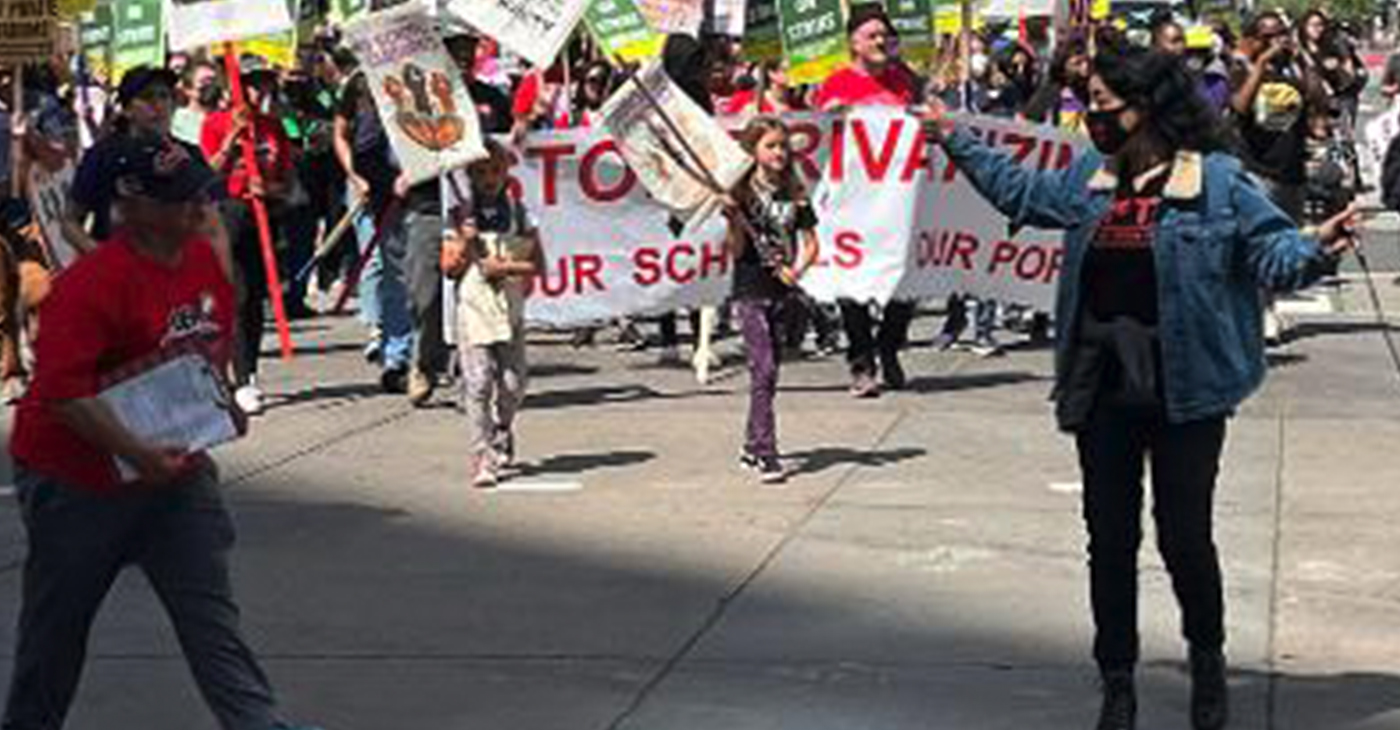 In a show of growing strength, Oakland teachers and longshore workers held simultaneous one-day strikes and rallies together on April 29 to stop billionaires and corporations, backed by elected Democrats, who seek to gentrify the city by closing as many as half of Oakland’s public schools and giving away public funds and public land to build a $12-billion luxury real estate project and baseball stadium at the Port.

At the heart of the protests were united actions of the Oakland Education Association (OEA) and the International Longshore and Warehouse Union (ILWU) Local 10. The strikes, as well as rallies and a march, were proposed by a new coalition, Schools and Labor Against Privatization (S.L.A.P.), composed of rank-and-file educators, members and leaders of the ILWU and community members opposed to the privatization of public assets and the accelerated displacement of Oakland’s Black, Latino and working-class residents.

The OEA called the one-day Unfair Labor Practices strike to protest the district’s unilateral decision to close schools this year and next year without consulting the affected school communities.

The union says this violates a 2019 strike settlement agreement. Seventy-five percent of voting members voted in favor of the strike, and 94% of union members honored the picket lines. Trying to have the strike declared “illegal,” the school district asked the California Public Employment Relations Board (PERB) for an injunction, but the request was denied. The district asked families to keep their children home from school that Friday.

The ILWU shut down the Port of Oakland’s day shift that Friday with a stop-work meeting, which is allowed under the union contract. Later in the afternoon, community members at Port terminals shut down the night shift as longshore workers refused to cross picket lines.

OEA President Keith Brown told the Oakland Post, “The reason why educators were forced to take this action is because the Oakland Unified School District must honor their agreements – there must be engagement with family and community before taking any actions to close schools. The actions of the majority of the school board have been very disrespectful to parents and the community. We are encouraged by the powerful support for the one-day strike. But it’s only the beginning of the movement to fund our schools and save our schools from closure.”

OEA representatives voted at a union meeting this week to “stand in solidarity with ILWU Local 10 and to support their fight to save the Port of Oakland. It’s a continuation of the longtime solidarity between educators of Oakland and longshore workers,” Brown said.

“There’s been tremendous support from parents, community and labor in this fight to save our schools, shown by numbers coming out for rallies,” Brown continued. “We need to continue to build from that momentum, to reach out to the faith community and others to organize and educate. We need to work in the November elections to elect school board members who will work with parents and stakeholders, not run from the community and not hide from the community, not close our neighborhood schools.”

Trent Willis, immediate past president of ILWU Local 10 and a leader of S.L.A.P., said the fight to stop privatization of the Port of Oakland is a survival issue for longshore workers.

“We have no choice but to oppose the stadium. We’re fighting for our lives,” he said. With only $1 billion of the $12 billion Howard Terminal project designated to build the stadium, Willis said, “This is a real estate deal masquerading as a stadium project. It’s a slick gimmick. Just having the stadium there would be a nightmare for cargo, pedestrians, the rails, transportation. The costs (to the public) would be astronomical to make it safe for people to travel through that area.”

He said he liked Councilmember Carroll Fife’s proposal for allowing Oakland voters to decide whether they want to use public funds to build the Port project. People in Oakland “don’t want to spend public money on building the stadium.”

Strike actions began early Friday morning with OEA members picketing at school sites throughout the city. Teachers were joined on the picket lines by students and families as well as community members and school workers in AFSCME and SEIU 1021.

At a mid-day event, hundreds of teachers and supporters held a “Save Our Schools” block party at Lake Merritt with interactive activities and warm solidarity, along with a lot of education on how school closures and privatization negatively impact Black students and other students of color.

A joint rally of teachers, port workers and community members took place at 2:00 p.m. in Oscar Grant Plaza in front of Oakland City Hall, followed by a short march down Broadway to rally in front of the school district headquarters at 1000 Broadway. At 4:30 p.m., members of the community went to the Port to shut down work on the night shift.

An election forum sponsored by S.L.A.P. on Saturday asked candidates for mayor, board of supervisors and county superintendent of schools where they stood on the issues of school closings and privatization of the Port.