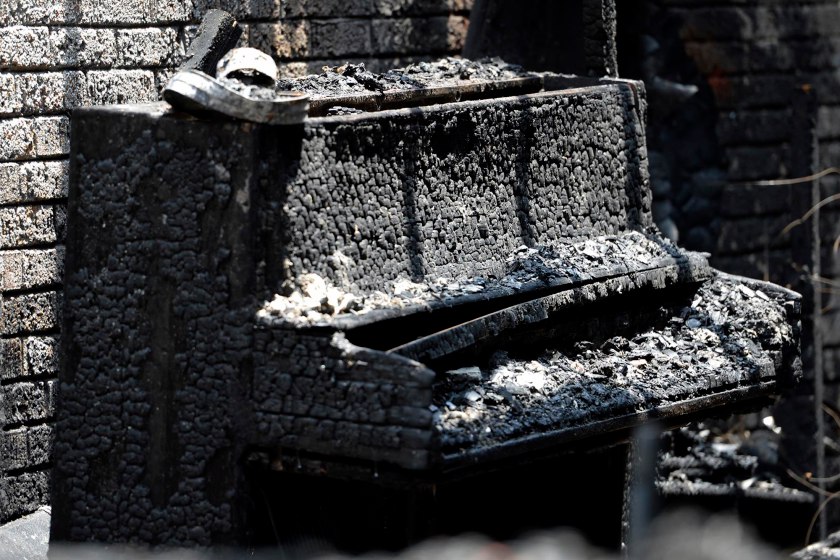 A destroyed piano is part of the charred remains of Briar Creek Road Baptist Church Wednesday, June 24, 2015 in Charlotte, N.C. Investigators with the Charlotte Fire Department say a fire at the predominantly black church is a case of arson. (Davie Hinshaw/The Charlotte Observer via AP)

At least five Black churches burned overnight recently and three have been attributed to arson.

Last week’s shooting at Charleston’s Emanuel AME was perhaps the deadliest attack on a Black church since the 1963 church bombing by the Klan in Birmingham, Ala. that killed four children. Since then, another specter from America’s violent racist history is again rearing its head – setting Black churches ablaze.

At least three have been intentionally set on fire in recent days, according to a survey of news reports compiled by the Daily Kos. Last week:

On June 22, someone set fire to College Hills Seventh Day Adventist Church in Tennessee, according to local WATE. The arsonist placed bales of hay outside the church doors and lit them ablaze, fire officials told the station. They also burned the church van.

On June 23, God’s Power Church of Christ in Georgia was intentionally set on fire, authorities told ABC News. Electronics and other equipment were also stolen in the early morning fire. Authorities told reporters there is “no evidence” of a hate crime.

On June 24, Briar Creek Baptist Church in North Carolina burned in the middle of the night, causing $250,000 in damage, NBC News reports. Authorities are investigating whether the intentional blaze was a hate crime. It took 75 firefighters to bring it under control.

On June 26, Glover Grove Missionary Baptist Church in South Carolina was virtually destroyed in an overnight blaze, the Aiken Standard reports. While the cause of the fire is still under investigation, the FBI has been called in.

Another blaze on the 26th in Florida at predominantly-Black Greater Miracle Apostolic Holiness Church caused $700,000 in damage. The fire is under investigation but fire officials believe it to be accidental, the Tallahassee Democrat reports.

Burning Black churches has historical significance that harkens back to the civil rights era, according to the Atlanta Black Star.

“From slavery and the days of Jim Crow through the civil rights movement and beyond, white supremacists have targeted the Black Church because of its importance as a pillar of the Black community, the center for leadership and institution building, education, social and political development and organizing to fight oppression,” David Love writes.

The Ku Klux Klan has ramped up recruiting activity in the days since the Charleston shooting. Residents in California, Kansas, Alabama, Mississippi, Florida, and Georgia woke last weekend to find bags in their lawns filled with candy and Klan flyers seeking new members.

White supremacist Dylann Roof, who has been charged with the attack that killed nine at Charleston’s historical Emanuel AME on June 17, left behind a racist manifesto that said, “We have no skinheads, no real KKK, no one doing anything but talking on the internet. Well someone has to have the bravery to take it to the real world, and I guess that has to be me.”

The fires also come as activists and politicians begin the process of removing the Con-federate flag from public property, sparking protests.

“We’re still talking about this issue and it’s 2015,” Briar Creek pastor Mannix Kinsey told CNN. “And so we all have to consider, what else do we need to do to actually be able to work together?”

A Study Documents the Paucity of Black Elected Prosecutors: Zero in Most States