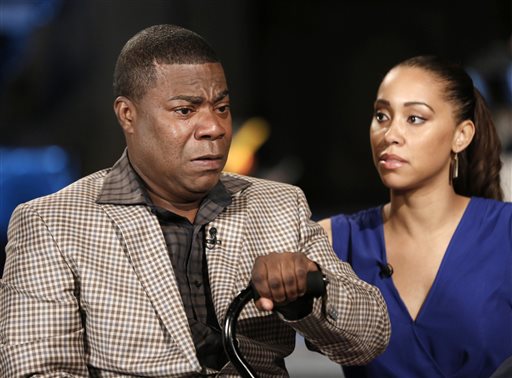 In this photo provided by NBC, actor and comedian Tracy Morgan, left, and fiancee Megan Wollover appear in an interview with Matt Lauer during taping for tonight’s Nightly News, Monday, June 1, 2015, in New York. Morgan spoke out for the first time since his tragic June 2014, car accident. The comedian discussed his memories of the accident, his struggle to recover, and his outlook for the future. (Peter Kramer/NBC News via AP)

NEW YORK (AP) — Tracy Morgan said Monday that he doesn’t remember anything about the limo crash that left him in a coma for two weeks and that, a year later, he still has bad days as well as good.

Appearing live on NBC’s “Today” show for his first public appearance since the accident, Morgan sat clutching a cane and became emotional as he recalled learning after the June 7, 2014, crash that fellow comedian James “Jimmy Mack” McNair was killed.

Morgan came across a video of McNair’s funeral on YouTube, and “I lost it for about a week,” he said.

Asked by “Today” host Matt Lauer what it’s been like emotionally, Morgan replied, “Up and down.” He said he had his daughter, son and fiancee, Megan Wollover, “so they keep my spirits up.”

“But the pain is always going to be there for Jimmy Mack,” he added, his voice cracking and his eyes welling. “He was a loving man, a warm man. He was a good man. He’s gone. That’s it.”

Last week Morgan settled a lawsuit with Wal-Mart, which owned the truck that slammed into the back of the limo van carrying him and others on the New Jersey Turnpike. Morgan suffered head trauma, a broken leg and broken ribs.

“I’m happy that Wal-Mart stepped up to the plate in a tremendous way,” he said. “I’m happy they looked out for Jimmy Mack’s family.”

Lauer noted that Morgan typically traveled with his family to comedy performances but chose not to bring them to the appearance in Delaware from which he was returning when the accident occurred.

“I told Megan, ‘You and the baby (daughter) stay home, and we’ll go to Delaware, and I’ll be right back,'” Morgan said.

Speaking of his own continuing recovery, he said, “I have my good days and my bad days, where I forget things. There are times where I get the headaches and the nosebleeds, and I won’t even let my lady know because I don’t want her to be worried about it.”

Asked if he hopes to get back to performing, he replied, with a tear streaking down his cheek, “I love comedy. I’ll never stop loving her. And I can’t wait to get back to her, but right now, my goal is just to heal and get better. Because I’m not 100 percent yet. I’m not. And when I’m there, you’ll know it. I’ll get back to making you laugh. I promise you.”

Janet Jackson Officially Announces New Album Due Out This Fall, Her First in 7 Years