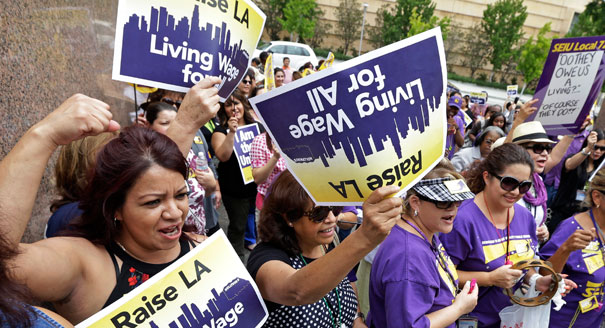 California’s minimum wage rose to $10 an hour within three years under the bill, which was passed in September 2013. (AP Photo)

WASHINGTON (NNPA) – More than 60 percent of small business owners with employees favor increasing the federal minimum wage from $7.25 to $10.10 in three stages, according to a new survey.

The poll, sponsored by the American Sustainable Business Council, an advocacy group that represents more than 200,000 businesses and Business for a Fair Minimum Wage, described on the group’s website as “a national network of business owners and executives who believe a fair minimum wage makes good business sense.”

The results from the poll conducted in June, showed that nearly 60 percent of small business owners say that raising the minimum wage would increase consumer purchasing power.

More than half of those surveyed also agreed that “that with a higher minimum wage, businesses would benefit from lower employee turnover and increased productivity and customer satisfaction.”

Six percent of the business owners in the survey were Black and roughly 80 percent were White. Ninety-nine percent of all African American businesses don’t have any employees.

Sherry Stewart Deutschmann, founder and CEO of LetterLogic in Nashville, Tenn., said that because her employees earn well above the minimum wage, they have more money to spend with other businesses.

“With our starting wage of $12 my employees have more money to spend at other businesses. We don’t count on other businesses and taxpayers to subsidize our profits by underwriting food stamps and other safety net assistance for our employees,” said Deutschmann. “Why should I be subsidizing the profits of companies that pay wages their employees can’t live on? A minimum wage raise is overdue.”

For proponents of a higher federal minimum wage, the poll results undercut the argument that raising the minimum wage would hurt small businesses.

Researchers have also dispelled that myth that many workers who get paid at or near the federal minimum wage are teenagers living at home and supported by their parents.

Low-wage workers are more educated than they were four decades ago (about 30 percent have some college experience) and older (less than 15 percent are teenagers).

The report also noted that today the minimum wage at $7.25 is worth less now than it was 50 years ago when more than 250,000 Americans marched on Washington for jobs and freedom in 1963.

“Unless there are significant policy changes, the rising population of young people of color will mature in a society that is not structured for their success,” said the report. “It is critically important that we address these issues now – before the inequality that disproportionately affects communities of color compromises our nation’s economic future.”