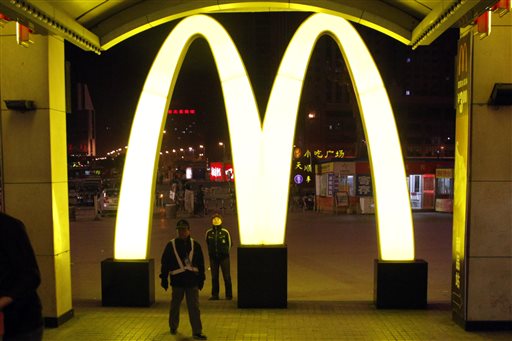 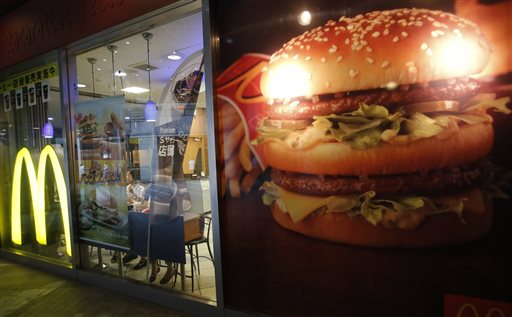 Customers have a meal at a McDonald’s restaurant in Tokyo, Tuesday, July 22, 2014. McDonalds Corp. said Tuesday its restaurants in Japan stopped using chicken from the Shanghai company Husi Food Co. McDonalds said Husi provided about 20 percent of the meat of expired chicken used in its chicken nuggets in Japan. (AP Photo/Shizuo Kambayashi)

BEIJING (AP) — A suspect meat scandal in China engulfed Starbucks and Burger King on Tuesday and spread to Japan where McDonald’s said the Chinese supplier accused of selling expired beef and chicken had provided 20 percent of the meat for its chicken nuggets.

Chinese authorities expanded their investigation of the meat supplier, Shanghai company Husi Food Co. A day after Husi’s food processing plant in Shanghai was sealed by the China Food and Drug Administration, the agency said Tuesday that inspectors also will look at its facilities and meat sources in five provinces in central, eastern and southern China.

The scandal surrounding Husi Food, which is owned by OSI Group of Aurora, Illinois, has added to a string of safety scares in China over milk, medicines and other goods that have left the public wary of dairies, restaurants and other suppliers.

Food safety violations will be “severely punished,” the food agency said on its website.

Starbucks Corp. on Tuesday said it removed from its shelves sandwiches made with chicken that originated at Husi. Burger King Corp. said it stopped using hamburger it received from a supplier that used product from Husi. Pizza restaurant chain Papa John’s International Inc. announced it stopped using meat from Husi.

In Japan, McDonald’s Corp. said it stopped selling McNuggets at more than 1,300 outlets that used chicken supplied by Husi. It said the Shanghai company had been supplying chicken to it since 2002.

A Shanghai broadcaster, Dragon TV, reported Sunday that Husi repackaged old beef and chicken and put new expiration dates on them. It said they were sold to McDonald’s, KFC and Pizza Hut restaurants.

During a conference call to discuss its quarterly earnings Tuesday, McDonald’s CEO Don Thompson said the company felt “a bit deceived” about the plant in question.

In a statement, Husi said it was “appalled by the report” and would cooperate with the investigation. It promised to share the results with the public.

“Our company management believes this to be an isolated event, but takes full responsibility for the situation and will take appropriate actions swiftly and comprehensively,” Husi said.

Some companies said they didn’t deal with Husi but had discovered their suppliers bought meat from that company.

Food and drug safety is an unusually sensitive issue in China following scandals over the past decade in which infants, hospital patients and others have been killed or sickened by phony or adulterated milk powder, drugs and other goods.

Foreign fast food brands are seen as more reliable than Chinese competitors, though local brands have made big improvements in quality.

“If confirmed, the practices outlined in the report are completely unacceptable to McDonald’s,” the company’s Chinese business said in a statement.

Yum’s KFC is China’s biggest restaurant chain, with more than 4,000 outlets and plans to open 700 more this year.

The company, based in Louisville, Kentucky, said in a statement that “food safety is the most important priority for us.”

“We will not tolerate any violations of government laws and regulations from our suppliers,” it said.

KFC sales in China plunged after state television reported in December 2013 some poultry suppliers violated rules on drug use in chickens. KFC overhauled quality controls and eliminated more than 1,000 small poultry producers from its supply network.

In Japan, McDonald’s spokesman Kenji Kaniya said the affected stores are in Tokyo area and the cities of Nagano and Shizuoka.

Other chicken used by McDonald’s in Japan comes from suppliers in Thailand and China, Kaniya said.