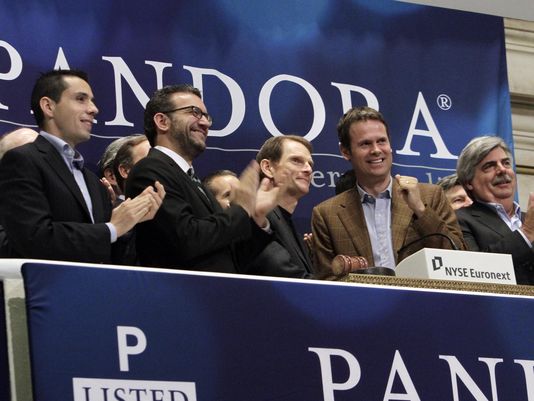 Tim Westergren and other Pandora execs ring the NYSE opening bell to celebrate the company’s IPO at the New York Stock Exchange in June 2011. (Richard Drew/AP)

SAN FRANCISCO (USA Today) — Pandora Media may be headquartered in Oakland — one of the nation’s most racially diverse cities — but its workforce is not much more diverse than any other major high-tech company.

In Oakland, blacks make up nearly a third of the population, and Hispanics, a quarter. But Pandora’s staff is mostly white, according to demographics that the music streaming company released on Wednesday.

The technical staff is largely white, Asian and male. Less than 18% of workers in technology jobs at Pandora are women, just 3.9% are Hispanic, and 2.8% are black. Sixty-two percent of technology workers are white and 26%, Asian.

The numbers are not as lopsided when it comes to women serving in non-technical roles. Nearly 58% of Pandora’s non-technical staff are women, and Hispanics make up 8% of those workers.

Q and A: Stop Your Phone from Devouring Data