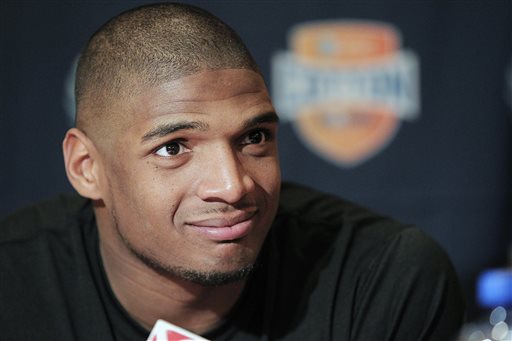 In this Jan. 1, 2014, file photo, Missouri senior defensive lineman Michael Sam speaks to the media during an NCAA college football news conference in Irving, Texas. Sam says he is gay, and he could become the first openly homosexual player in the NFL. (AP Photo/Brandon Wade, File)

The planned documentary by the Oprah Winfrey Network on Michael Sam, the NFL’s first openly gay player, has been postponed.

Erik Logan, president of the network, said Friday that the postponement was made after meetings with the St. Louis Rams.

“After careful consideration and discussion with the St. Louis Rams, ‘The Untitled Michael Sam Project’ has been postponed, allowing Michael the best opportunity to achieve his dream of making the team,” Logan said in a statement.

“It’s clear that we, along with the world, recognize the important opportunity that Michael now has in this moment. We will continue to support him in his journey to earn a spot playing for the Rams.”

As a seventh-round draft pick, Sam will face hefty challenges just to make the Rams. Being the subject of a TV documentary could have been a major distraction for the defensive end from Missouri.

“This (postponement) will allow for Michael to have a total focus on football, and will ensure no distractions to his teammates,” added Sam’s agent, Cameron Weiss. “Everybody involved remains committed to this project and understands its historical importance as well as its positive message.”