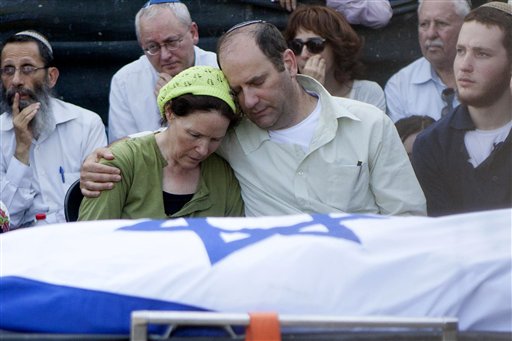 Avi and Rachel Fraenkel embrace during the funeral of their son, Naftali, a 16-year-old with dual Israeli-American citizenship, in the West Bank Jewish settlement of Nof Ayalon, Tuesday, July 1, 2014. (AP Photo/Tomer Appelbaum)

The three “gifted, pure, honest and decent” teens were “cut down by the hands of evil men,” he said, calling those behind the attack “murderers.”

“A broad moral gulf separates us from our enemies. They sanctify death, we sanctify life. They sanctify cruelty, and we mercy and compassion. That is the secret of our strength.

“That is also the foundation of our unity. Throughout the history of our people, we have proved time and again — in view of the horrors that we have experienced, the grief and sorrow — the force of life that pulsates within us overcomes the forces of death,” Netanyahu said in Hebrew, according to a CNN translation.

Mandela’s Widow, Graça Machel, Speaks of Her Loss for the First Time