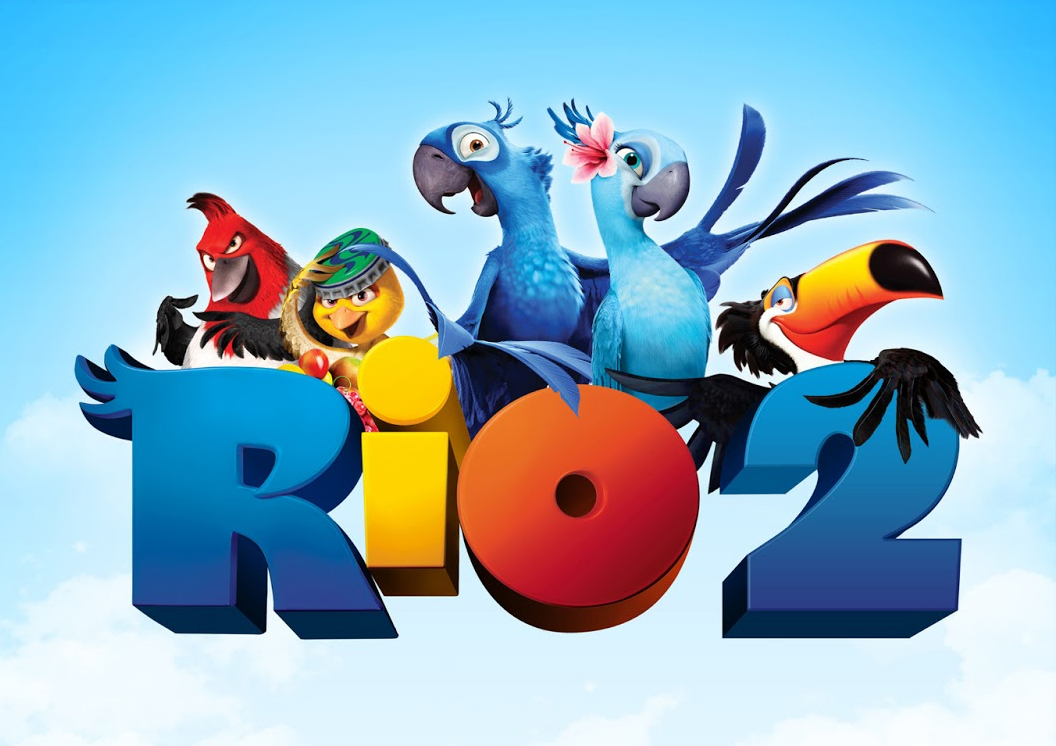 You know what they say, “Birds with blue feathers have to stick together!” In this spirited and very sweet sequel to the box office hit Rio ($486 million in international sales), the story continues about a previously thought to be extinct exotic bird species called the Blue Macaw. Before, the lovable creatures were saved by two scientists/preservationists, and they made a home in Rio de Janeiro, Brazil. Now, the party continues in Brazil’s Amazon jungle, and the trip there is more than worth the effort.

Director/writer Carlos Saldanha (Ice Age: The Meltdown, Ice Age: Dawn of the Dinosaurs) created the basic storyline for this follow-up, which was initially fleshed out by the original Rio writer Don Rhymer, who passed away in 2012. It took three screenwriters (Carlos Kotkin, Jenny Bicks and Yoni Brenner) to carry the script across the finish line. The result is a dense screenplay with a lot of characters. In another filmmaker’s hands, the plotting might be difficult to discern, but in this movie it just feels like a large extended family of misfits, rivals, adversaries and interlopers is on an adventure. Kudos to Saldanha for giving the entire film an entrancing rhythm that’s as infectious as a samba beat.

Blu (Jesse Eisenberg) and his wife Jewel (Anne Hathaway) are Blue Macaws and the proud parents of Bia (Amandla Stenberg) a bookwormish type; Tiago (Pierce Gagnon) the youngest; and Carla (Rachel Crow) the eldest, who is a musically-rambunctious teen. Their extended family includes Nico (Jamie Foxx) a tiny yellow bird, Rafael (George Lopez) a toucan, Pedro (will.i.am) a cardinal and Luiz (Tracy Morgan) a bulldog. Nico, Rafael and Pedro are wannabe entrepreneurs/promoters who are looking for musical acts to headline at Carnival. Tulio (Rodrigo Santoro, 300: Rise of an Empire) and Linda (Leslie Mann, Knocked Up) are the preservationist couple who protected the Blue Macaws. It’s their new discovery that starts the film on an exotic voyage.

Tulio and Linda discover a blue feather that leads to a Blue Mcaw sighting in the Amazon. They are dying to find out if other Macaws still exist in the wild. Blu wants to go along for the adventure. Jewel, the missus, is unhappy that her offspring, like their father, are so caught up on human traits. She wants to go back to the Amazon so they can all return to their natural roots.

The bird family’s journey is tracked by a clever series of paper pop-up gimmicks that map out the geography of Brazil (Salvador, Bahia; the meeting of the brown and black waters of the Amazon) along with clever GPS imagery. It’s a great time for young filmgoers to learn about Brazil’s wondrous cities and landscapes, which makes the film more than quality family entertainment but also a learning tool.

In fact all the technical aspects of this endeavor are ingenious. Renato Falcao’s (Ice Age: Continental Draft) cinematography picks up all the rich colors imagined by Melanie Martini’s set decoration. The visual effects, sounds (chirps come from all corners of the room) and animation are superb. The music, with Sergio Mendes as executive music producer and John Powell (Shrek, Happy Feet) as a composer, is evocative and caresses Brazilian culture.

As the flock migrates to the Amazon, unbeknownst to them, they are pursued by Nigel (Jermaine Clement, Men in Black 3) a vengeful, flamboyant cockatoo who fancies himself as a method actor and his love interest Gabi (Kristin Chenoweth) a pink/purple amphibian. To Jewel’s great surprise and happiness, deep in the forest, she is reunited with her long-lost father Eduardo (Andy Garcia) the leader of the last tribe of Blue Macaws, her flighty Aunt Mimi (Rita Moreno) and Roberto (Bruno Mars), an old childhood friend who has grown into a handsome flirt.

The film’s second act starts after Blu and Jewel arrive in the forest and this is where the myriad of subplots get tangled: There’s the family reunion; a rivalry between the Blue Macaws and a red bird group; Blu and his father-in-law don’t get along; Blu is jealous of Roberto; Rafael and his crew audition jungle creatures for their big carnival show; brutish men plow down the rain forest; Nigel and Gabi hunt Blu; Tulio and Linda get caught in various states of peril…

There’s a lot going on! Is this the result of one-too-many screenwriters? Maybe. That said, the potpourri of storylines is pretty easy to navigate, and the film is so much fun kids won’t notice and adults will understand that underneath all the shenanigans is a message movie about saving the Rain Forest. Possibly, this is a good time to cue Sting and Bruce Springsteen so they can plug their Rain Forest benefit concerts. Maybe not.

Audiences won’t debate the complexities of the plotting, beguiling music, dazzling visuals, broad humor or catchy music. The real fistfights will break out when people discuss who stole this movie. Eisenberg, Hathaway, Mann and Santoro are perfect. Lopez, Foxx, Morgan and will.i.am are funny. Bruno Mars sings like, well, a bird. But the over-the-top actors who take no prisoners are: Garcia as the very three-dimensional dad/leader, Clement as the tortured actor who convincing sings Gloria Gaynor’s “I Will Survive” for an audition and the irrepressible, diminutive Chenoweth, who delivers her solos like a fat lady bringing down the curtain at the Metropolitan Opera House. She is a shameless stage hog.

By the way, it’s refreshing to see an animated movie with such a multicultural and diverse cast. Disney and DreamWorks take note.