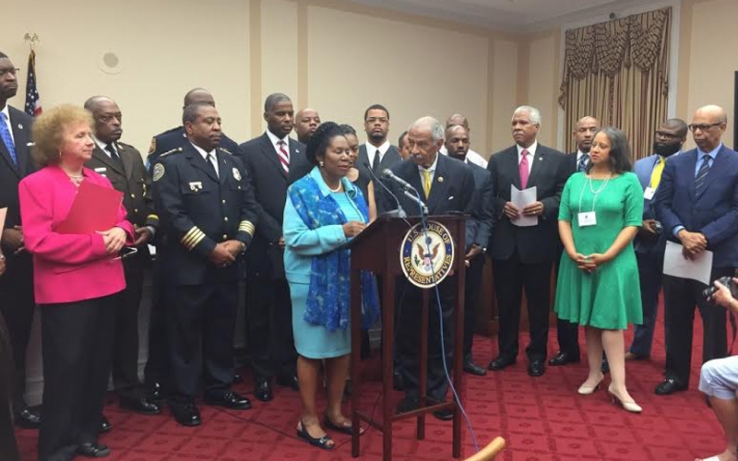 By Jeffrey L. Boney
Special to the NNPA from the Houston Forward Times

Congresswoman Sheila Jackson Lee, a senior member of the House Judiciary Committee, and Ranking Member of the Subcommittee on Crime, Terrorism, Homeland Security and Investigations unveiled a package of measures to provide young people in the criminal and juvenile justice systems much needed relief and protection.

The Congresswoman was joined by the National Organization of Black Law Enforcement Executives (NOBLE), the Families Against Mandatory Minimums (FAMM), NAACP, the UNCF, the National Council of Churches, EXODUS, National Association of Evangelicals and the mother and brother of Kalief Browder.

The need for meaningful criminal justice reform is critical and the bipartisan support for reform is greater than ever. With these specific initiatives, the concept of law enforcement training will provide a roadmap for being a guardian and a protector for police departments in America.

Last week the Congresswoman introduced a package of measures to provide young people in the criminal and juvenile justice systems much needed relief and protection. These measures provide more humane laws and are provided for rehabilitation, to finish school, to go to college and to create opportunities for themselves and their family. In doing so, this legislation seeks to prevent another tragedy like that of young Kalief Browder, among others, who committed suicide after spending three years in Rikers, two of which in solitary, and to acknowledge the differences in the brain development and maturity of our young people in order to better respond to their needs and prevent recidivism.

“I have introduced three bills that focus on sentencing and incarceration in the federal system, expungement and sealing of federal convictions, and humane confinement of youth,” said Congresswoman Jackson Lee. “We are a law-abiding nation which includes all backgrounds, races, and religions. But by God’s grace we can have a better system.”

H.R. 3158, the Reforming Alternatives to Incarceration and Sentencing to Establish A Better Path for Youth Act of 2015 (RAISE Act):

“While there has been a lot of discussion of how to improve law enforcement practices nationwide, these bills recognize that every law enforcement agency has different needs and that best practices must adapt to changes in communities and technology,” said Congresswoman Jackson Lee. “In doing so, I believe that any attempt at reform must have the wholesale support of our community in order to be successful.”

How a Young Joe Biden Turned Liberals Against Integration