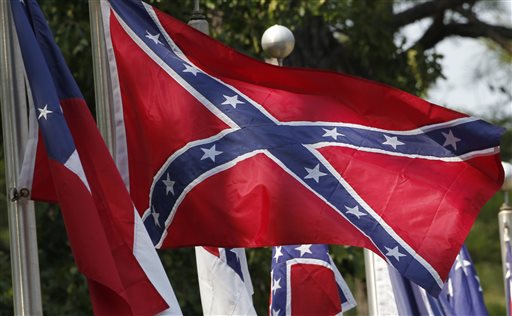 The national president of a U.S. civil-rights group said Wednesday that Confederate symbols represent “treason” and should be removed from public objects, including the Mississippi state flag.

Debate about the prominence of Old South symbols reignited after the June 17 massacre of nine black worshippers at a church in Charleston, South Carolina.

Charles Steele Jr., head of the Atlanta-based Southern Christian Leadership Conference, said Wednesday at the Mississippi Capitol that Confederate names should disappear from streets and structures.

“The Confederacy and what it stands for is treason,” he said.

Steele said he believes if African-Americans had ever organized to overthrow the U.S. government, they would’ve been killed or deported, and the South needs to stop commemorating the Confederacy.

Since the Charleston killings, some Mississippi leaders have called for changing the flag the state adopted in 1894, with the Confederate X in the upper left corner. Mississippi House Speaker, Philip Gunn, a Republican, cites his Christian faith in saying the Confederate emblem is offensive and the state needs a flag that would unify people.

Republican Gov. Phil Bryant says Mississippi voters should decide the flag’s fate. During a statewide election in 2001, people voted nearly 2-to-1 to keep the Confederate design.

Greg Stewart, a longtime member of the Mississippi Division of Sons of Confederate Veterans, said he believes politicians are latching onto the Charleston shootings as an excuse to change Confederate symbols and distract attention from other issues, such as an international trade agreement recently debated in Washington.

Steele, a former Alabama state senator, specified two structures he thinks should be renamed in his home state: Robert E. Lee High School in Montgomery, which was named decades ago for the top Confederate general and now has a mostly black enrollment; and the Edmund Pettus Bridge in Selma, named for a Confederate general who became a Ku Klux Klan leader. Police attacked civil-rights marchers on the bridge in 1965.

Meanwhile, the fallout from the June 17 massacre in Charleston continued elsewhere. Authorities in South Carolina were investigating the vandalism of a statue of a segregationist governor as the state grappled with heightened tension over Confederate symbols.

Red paint was seen dripping from the statute of “Pitchfork” Ben Tillman on the Statehouse grounds in Columbia. Department of Public Safety spokeswoman Sherri Iacobelli said an officer saw what appeared to be a red paintball on the statue during morning rounds. Workers were cleaning the statue Tuesday afternoon.

Tillman, a noted white supremacist who unapologetically advocated lynching any black who tried to vote, spent three decades — from 1890 to 1918 — as governor and as a U.S. senator. In 1940, the state commemorated him with an 8-foot (2.44-meter) bronze statue, on which Tillman is described as a “friend and leader of the common people.”

Outside Atlanta, Confederate flags will continue flying at Stone Mountain Park because Georgia law prevents their removal, the head of a state authority that oversees the park said.

The law would have to be changed for the flags to be removed, said Bill Stephens, chief executive officer of the Stone Mountain Memorial Association.

Stephens said the park’s Flag Terrace, where multiple versions of Confederate flags fly, was donated by the United Daughters of the Confederacy in 1964. He said it’s considered a memorial and, as such, can’t be removed or relocated under Georgia law.

Meanwhile, TV Land has dumped “The Dukes of Hazzard.” The network confirmed that reruns of the 1980s action comedy, with its Confederate flag imagery, have been pulled from the schedule.

Warner Bros., which produced the series, last week halted production of toy replicas of the so-called General Lee, the 1969 Dodge Charger stock car driven by rambunctious Southern cousins Luke and Bo. The car famously features a replica of the Confederate flag on its roof.

Retailers including Walmart and eBay have stopped selling merchandise bearing reproductions of the flag.