Cincinnati has night of firsts
Advertisement 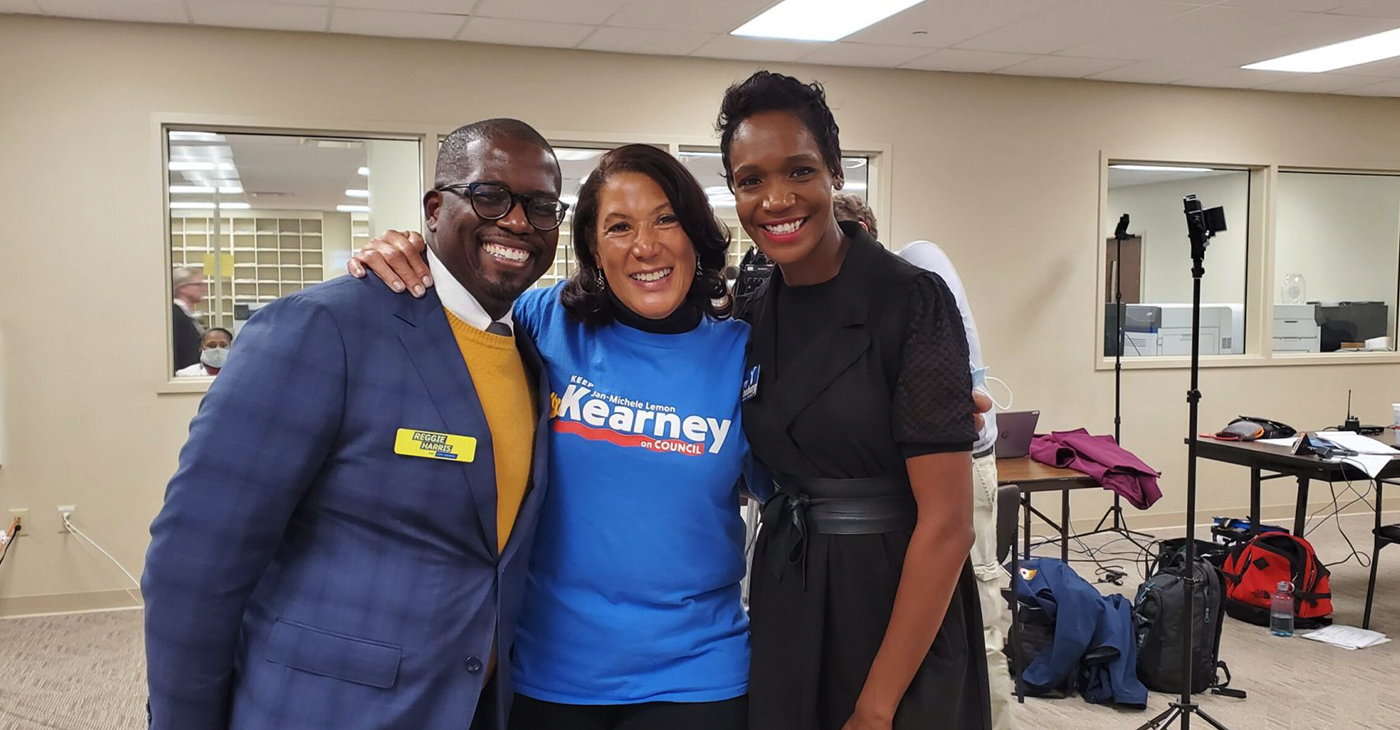 “We had a really strong group. The Hamilton County Democratic party picked a strong slate and we worked hard together, and we will continue to work together,” Jan-Michele Lemon Kearney said at the Hamilton County Board of Elections. “Working together is the way to win. Instead of being out there being negative, we were positive, and we had values that are strong, and we have a plan to move Cincinnati forward and that is what it really takes.”

Democrats dominated the night winning eight of the nine seats on City Council. Council Member Liz Keating is the lone Republican who will retain her seat to which she was appointed. In fact, Kearney and Keating are the only appointed council members who are returning to City Council. Both Steve Goodin and Betsy Sundermann, also appointed to council, failed to attract the votes needed to be in the top nine vote-getters.

Appearing at the Hamilton County Board of Elections, city council candidate Reggie Harris said his winning is very surreal but he is very humble and gratified that voters chose him to be on council. “I am really excited, and I feel validated because my team and I created a plan and strategy that was central to our values of equity, inclusion and transparency that crafted a message that a wide variety of voters said yes too,” Harris said.

“I am a first-time candidate. I have never done this before and we went with our gut and it’s nice to have a moment in which your gut is validated,” he added.

The winners of the City Council are:

Voters at various polling locations said they were looking for people who can make change, be grown-ups, show leadership and not allow themselves to be corrupted. Cincinnati residents had a record pool of 35 candidates to choose from. In 2017, voters only had to choose from 23 candidates.

City Council candidate Meeka Owens said she is very excited by the results of the race. She said Cincinnatians wanted change. “They (voters) wanted elected officials working on their behalf. They want to see diversity at city, and they want to see people not just talking but backing that up with action.”

In the mayoral race, history was made by electing Aftab Pureval, the first Asian-Pacific mayor of Cincinnati and in the Midwest.

“We made history,” Pureval declared during his acceptance speech.

From the moment the unofficial early vote numbers were released Pureval, 39, grabbed the lead and never let go. He received 68 percent of the vote, and the voters never waivered in their selection. Throughout the campaign, long-time career politician David Mann, 81, tried to swing voters his way, but the voters were determined the city needed new leadership.

During his acceptance speech before supporters, Pureval spoke about his parents coming to American and to Ohio to offer their sons a better opportunity. He noted that because of his parent’s courage and bravery to come to a different country, on Election night his family went from refugees to mayor of Cincinnati.

Pureval noted that Cincinnati is the place people can come to make their dreams come true. “I have achieved mine,” he told his supporters.

Although it is not the outcome he wanted, David Mann congratulated Pureval on his win. Tweeting, “Congratulations to Aftab on his well-deserved victory,” he said. Mann then proceeded to thank Cincinnati saying it has been an honor of a lifetime to serve the community.

Pureval won against Mann with 65.75% of the votes.

Donte Johnson won the Hamilton County Municipal Court District 2 race for judge receiving 43.75% of votes. Elizabeth Tye had dominated the race for most of the evening until Johnson nudge her from her lead position. Tye received 42.48% of votes while Bertha Garcia Helmik was never threat to either candidate. She remained at the bottom receiving 13.78% of votes.

Cincinnati voters were very decisive on who they wanted to fill the four seats on the Cincinnati School Board. The voters decided a mixture of returning and new candidates will help keep the leadership fresh while pushing the school system forward and searching for a new superintendent.

Mary Wineberg dominated the race all night long. She said after the results came in that she is grateful the voters supported her and noted that they wanted change. “It lets me know they wanted a new face, I am that new face and I am ready to represent them and be that voice,,” Wineberg said.

The winners of the school board race are:

Northwest School District voted in Nicole Taubee, Rich Haffey and Michelle Philpot to the Board of Education.

Issue 3: Proposed Charter Amendment (by petition) – City of Cincinnati did not pass.

Fighting the Cycle of Violence with Stipends and Mentorships