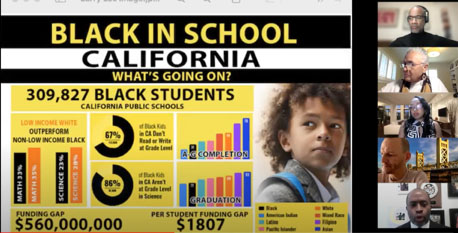 (WORDINBLACK.COM) – State Superintendent of Public Instruction Tony Thurmond highlighted two new initiatives at the Department of Education this week, taking on the “opportunity gap” between Black students and others.

Thurmond, addressing a “Black In School” panel of top educators and policymakers on October 9, announced initiatives built around diversifying the teacher workforce with a pipeline focused on male educators of color, and a new task force centered on Black student achievement.

Thurmond added that the current California budget, with support from Gov. Gavin Newsom and the Legislature, provides the resources to diversify the workforce.

“Black In School,” presented by the Education Committee of the California Democratic Party Black Caucus, was the second of four in a series.

There are 309,827 Black students in California public schools. This virtual series seeks to put a spotlight on these students and generate “powerful ways to improve the Black experience,” the CDPBC said in a statement.

Panelists presented a number of projects currently in the works seeking to address the opportunity gap — including universal transitional kindergarten, pipelines for male educators of color, open houses with parents and students, and a race equity index which helps discuss issues that disproportionately affect Black students without being in violation of Proposition 209.

The panel included Thurmond, California Community Colleges Board of Governors President Pamela Haynes; Assemblyman Kevin McCarty, and Elease Cheek with the Solano County Board of Education. It was moderated by Larry Lee, president of The Sacramento Observer newspaper.

The panelists, who repeatedly said the disparities must stop now, pointed to data. Of the more than 300,000 Black students in California:

Haynes, a veteran educator who also serves on the Los Rios Community College District, believes part of the issue lies in continuously wanting to fix the student and not the system.

“We need transformation, not reforming what has not been working,” she said.

Haynes added that educators also need to focus on equity.

“It means you push resources towards those who are in most need, which is different from equality. Equity is looking at who is most in need — but not equally distributing resources.”

Additionally, she emphasized the need for more Black educators.

Haynes was brutally honest with the virtual audience: “Our institutions operate from a position of being race evasive. We have got to begin to have explicit, intentional, unapologetic conversations that are uncomfortable.”

Thurmond agreed with Haynes that “we need to be intentional in talking about supporting and improving Black student achievement.” Thurmond said that while he is “completely and squarely focused on helping all six million students regardless of their background,” the reality for Black students and families remains.

“We are more likely to have underlying health conditions that put us at higher risk for COVID, homelessness, food insecurity, living in poverty. When you layer all these things together you see that you absolutely need to have a strategy that is intentional,” he said.

As a legislator, Thurmond introduced Assembly Bill 1014 which he described as taking money from the criminal justice system to put in schools for programs that reduce chronic absenteeism and promote restorative justice. He now oversees those grants, to date allocating near 90 million.

At the department of education, Thurmond has created the first-ever equity branch led by Dr. Daniel Lee, rolling out “Education to End Hate.” The program, launched during COVID-19, provides anti-racism and implicit bias training to educators in schools.

“We started at the department of education, I made it a requirement that every administrator must take implicit bias training and diversity training,” Thurmond said.

More than $200,000 has been allocated to various school districts for more anti-racism programs. Another $200,000 will fund “equity grants” focused on closing the gaps. Thurmond announced a brand-new $10 million grant program focused on anti-racism and anti-hate.

Thurmond feels one of the keys to minding the “opportunity gap” is recruitment of male educators. He has partnered with Assembly member Mike Gipson (D-Compton), to introduce a bill to expand the number of male educators of color that work in classrooms.

“Almost 70% of our students are of color. Our workforce does not reflect that,” Thurmond said.

Thurmond’s strategy for identifying and closing the gaps, without running afoul of Prop. 209 by talking about race, includes working with Ryan Smith, Chief External Officer at Partnership for Los Angeles Schools, and the grassroots Brotherhood Crusade of south Los Angeles. Thurmond said they have developed “a new metric that looks at many conditions that students of color experience — but doesn’t call them out by race.”

By using it in the L.A. Unified School District, they found a way to increase the amount of money students experience by looking at identifiers like free and reduced lunch, and poverty rates. Thurmond says that the metric also examined things that historically don’t get looked at like communities impacted by violence.

“When you layer these together you create a way to have a conversation about serving students of color and Black students — and about being able to increase the amount of money available to serve them,” Thurmond said.

Thurmond went on to detail the Racial Equity Index, an approach he hopes to use with the schools and the state.

“There are probably two dozen school districts in the state that have the highest incidents of racial segregation and poverty. We are going to use this racial equity index to revisit that legislation to give us a way to work directly in those schools — to be on a course to directly support Black students.”

After seven years, McCarty finally passed Universal TK. “That’ll be a huge boom for all Californians,” said McCarty. “Specifically, Black Californians disproportionately impacted by having a lack of access to early childhood education.”

Black Californians will now have multiple years of free quality early education before they start kindergarten, which will have a huge impact on the readiness gap, McCarty said.

McCarty has also been developing a program that makes it easier for Black and Brown teachers to get certified and is already producing results. He acknowledges that there have been challenges in implementing solutions.

“Black students … are not geographically concentrated like they were 20, 30, 40 years ago. We have to look statewide,” he continued.

“This is the best budget in the history of California,” he said. “The money we put forward lifted all boats. It’s still not enough, we still see the disparities. But the big issue is that there is the desire to do something here.”

Who are we listening to?

Cheek, a trustee with the Solano County Board of Education, asked the rest of the panelists: “Who are we listening to? I am on the ground. I am in the trenches and I am working with students every day. I am talking with students … I am looking at building a pipeline for careers and construction that sustain the families in our community.”

Cheek feels the answer to the shortage of diverse teachers is clear: “Make the educational career exciting for our students. They will be the ones going for those positions.”

Cheek has held town halls and spoken with students who, she says, tell her that as young students, juniors and seniors going to college no one listens to them. Cheek believes that when it comes to the youth one element that is key to closing the gap is that “we…listen to their stories, understand … their family dynamics.”

EDITOR’S NOTE: A.V. Benford is a Report for America Corp Member and an Education Reporter for Cap Radio News and The Sacramento Observer. Support for this Sacramento OBSERVER article was provided to Word In Black (WIB) by the Chan Zuckerberg Initiative. WIB is a collaborative of 10 Black-owned media that includes print and digital partners.

COMMENTARY: When a Child Shoots a Child at School…