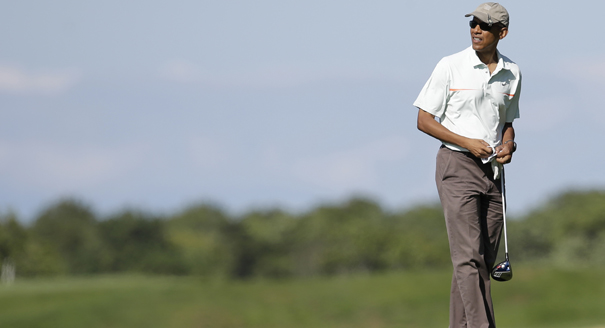 President Barack Obama prepares to tee off while golfing at Vineyard Golf Club, in Edgartown, Mass., on the island of Martha’s Vineyard, Thursday, Aug. 14, 2014. President Obama is taking a two-week summer vacation on the island. (AP Photo/Steven Senne)

(Politico) – President Barack Obama really wanted to take a vacation. But then the world intervened.

The president’s plan to snag two weeks off in Martha’s Vineyard has been an utter failure, marking his worst attempt at relaxation since the Detroit underwear bomber consumed his 2009 Christmas holiday in Hawaii.

On the eve of his departure late last week, Obama authorized airstrikes in Iraq to beat back Islamist militants from committing genocide. Then as he wrapped up his first round of golf on the Massachusetts island Saturday night, The Atlantic interview with Hillary Clinton hit the Web, sparking days of speculation about the fraying Clinton-Obama relationship.

The White House thought it might get beyond the frenzy du jour on Wednesday night when it released much-anticipated details of their interaction at a birthday party — they toasted the guest of honor and even sat close to each other!

No Arrest Warrant Being Issued for Texas’ Perry