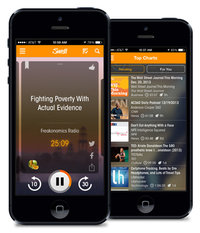 (ZDNet) – Late Sunday re/code broke the news that Apple acquired Concept.io for $30 million. The company’s Swell app for iOS was best described by Liz Gannes as “Pandora-for-talk-radio” and was a home screen app for me.

Swell’s strength was in its podcast discovery feature. At first launch users would select from a dozen or so pre-defined categories (like technology, science, movies, etc.) and Swell would use an algorithm to select individual podcasts for you. Like Pandora and iTunes Radio, Swell learned from skips, likes, shares and listen times to serve more relevant podcasts. And it was great.

It was one of the few iOS app that I could launch and just listen to. On the rare occasion that I didn’t like a particular podcast, a simple right-to-left swipe brought up the next podcast ‘card’ in the well-curated cue. Podcasts in Swell were  streamed (rather than downloaded) relieving users of the find-subscribe-download-play drudgery typical of most “podcatcher” apps.

UK to Allow Driverless Cars on Public Roads in January