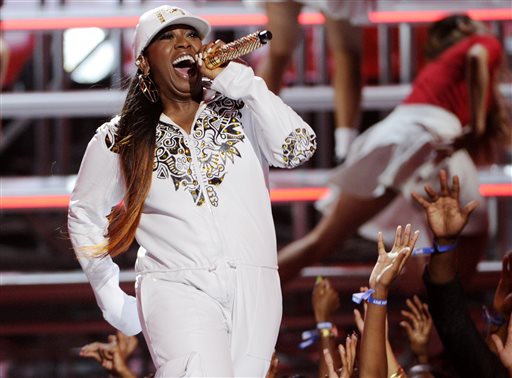 In this Sunday, June 29, 2014, file photo, Missy Elliott performs at the BET Awards at the Nokia Theatre, in Los Angeles. (Photo by Chris Pizzello/Invision/AP, File)

(Madame Noire) – Today, Missy Elliott, rapper, entertainer, singer, producer, renaissance woman, turns 44. And like most Black girls around the world, Missy is an inspiration to us.

Personally, Supa Dupa Fly was the first time I saw and felt myself represented in Hip Hop. And in addition to her musical genius, she also taught us the invaluable lesson that you can make it all the way to the top and be beloved the world over just by being exactly who you are.

If you’ve seen Missy Elliott’s “Behind The Music,” you know that she got one of several big breaks when she finally got the chance to work with Puff Daddy. He asked her to be a part of the 1996 remix of Gina Thompson’s song “The Things That You Do.” The song was the one and only time Thompson appeared on the Billboard charts, but Missy’s “He-He-Haw” line seemed to singlehandedly launch her into mainstream consciousness, where she would remain, until today.

Find Out How Much You Really Pay for Entertainment