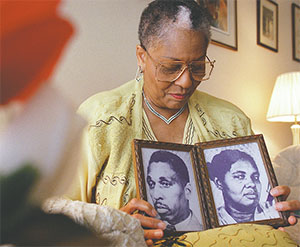 Special to the NNPA from The Florida Courier

It was on Christmas night 1951 when her father, Harry T. Moore, was murdered instantly when a bomb placed by racists exploded under the family’s Mims home. Nine days later, her mother Harriette V. Moore died as a result of injuries sustained in the bombing.

The Moores were some of the earliest civil rights leaders in Florida and began their work in Brevard County. Harry Moore, a graduate of Bethune-Cookman College (now University), was the Florida state field secretary for the NAACP. He fought for equal pay for teachers, spoke out against violent atrocities against African-Americans, and registered thousands of voters.

At the time they were killed, Harry Moore, who also founded the Brevard County chapter of the NAACP, was registering large numbers of Blacks to vote and protesting the circumstances around a rape trial in Groveland – including the killings of two of the defendants by the Lake County sheriff.

Such activism, in a state still under the harsh rule of Jim Crow, drew the ire of the Ku Klux Klan.

In 2006, Florida’s then-Attorney General Charlie Crist spoke about the Moores’ murders under a rambling oak tree just yards from where the Moore home stood, now the site of a cultural center honoring the couple.

Crist said strong circumstantial evidence – unearthed during a 20-month investigation – pointed to ultra-violent factions within the KKK “as being responsible for this horrible act.’’

In the Moore case, investigators interviewed more than 100 people and combed through 50 years of documents. The bombsite was even excavated, though it yielded no new evidence.

But the stories of witnesses did. They told of a particularly violent group of men who were working to squash the efforts of the Moores. Those implicated were Earl J. Brooklyn, Tillman H. Bevlin, Joseph N. Cox and Edward L. Spivey. Crist, who said others may have been involved, failed to elaborate on the roles each man played.

Spivey reportedly confessed to investigators and an anonymous tipster before his death from cancer in 1980. But by that time, the case was nearly 30 years old and the other three men were long dead.

Bevlin died less than a year after the bombing, reportedly of natural causes. Brooklyn died on the attack’s one-year anniversary, and Cox committed suicide in 1952 – one day after an interview with the FBI about the case.

Investigators said Brooklyn and Bevlin had floor plans of the Moore home, and Cox may have been rewarded with a paid-off mortgage for participating in the crime. Spivey is believed to have been at the home on the night of the bombing.

Sixty-three years later, Moore has given up hope that her parents will receive justice. She was praying that the four suspects in the killings would be formally named as suspects when she received a letter from the FBI telling her that investigators had been unable to find anything that would help them to definitively identify the culprits.

“I haven’t heard from them since. I guess I will never have closure,” said Moore, of New Carrollton, Maryland.

Moore, 84, is among hundreds of loved ones of men, women and children killed in decades-old civil rights cases who still yearn to have someone held accountable for the killings.

In 2007, at the urging of civil rights activists, Congress passed the Emmett Till Unsolved Civil Rights Crimes Act that was named for 14-year-old Emmett Till, a Chicago youth who, in 1955, was brutalized and killed by racists in Money, Miss. after he whistled at a White woman.

At a panel discussion Dec. 9 at Washington, D.C’s National Press Club, relatives of civil rights murder victims described their efforts to see done for their loved ones. The event was sponsored by the Cold Case Justice Initiative (CCJI) of the Syracuse University College of Law, one of a handful of university-based programs where law students investigate civil rights murders.

“For years, I didn’t know anything about what happened. I guess my mom didn’t want us to know what went on because we still live in that town,” said Darlene Morris-Newbill, 41, whose great grandfather, Frank Morris, died after he was set on fire by racists in Ferriday, La., in 1964. The case was investigated by the CCJI and turned its research over to the Department of Justice, which said it was unable to determine or prosecute a culprit.

Speakers urged Congress to extend the Till Act, which is set to expire in 2017. Under the act, Congress appropriated funding to the DOJ to investigate unsolved civil rights murder cases and, whenever possible, to bring killers to justice.

The panel included Rep. Sheila Jackson-Lee (D-Texas); Emmett’s cousin, Thelma Edwards, who still remembers the night he was snatched from her parent’s home at gunpoint; Paul Delaney, a former editor at the New York Times who wrote extensively about civil rights murders; and Paula Johnson and Janis McDonald, the Syracuse law professors who co-direct the CCJI.

Avis Thomas-Lester of NNPA and the Washington Informer contributed to this report.