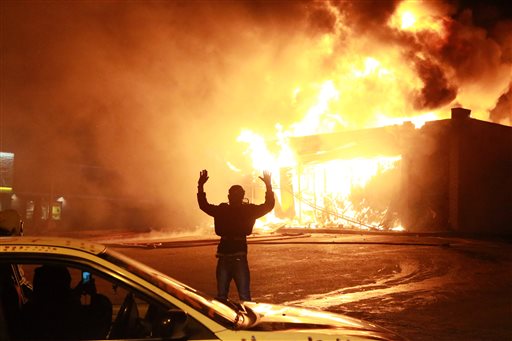 In this Nov. 24, 2014 photo, a protestor poses for a “hands up” photo in front of a burning building on West Florissant Ave. in Ferguson, Mo. Hands Up, Dont Shoot has become a rallying cry despite questions whether Michael Brown’s hands were raised in surrender before being fatally shot by a Ferguson police officer. (AP Photo/St. Louis Post-Dispatch, Christian Gooden, File)

The letter submitted Monday to St. Louis County Circuit Judge Maura McShane also asks for a special prosecutor to oversee the case and an investigation of the grand jury proceedings that ended in November with a decision not to charge Officer Darren Wilson.

Lawyers and other experts who analyzed grand jury transcripts for the fund raised concerns about the decision to allow a witness to provide false testimony, erroneous legal instructions to grand jurors, and “preferential treatment of Mr. Wilson by the St. Louis County Prosecuting Attorney’s Office,” said Sherrilyn Ifill, the fund’s president.

Wilson, who is white, fatally shot Brown, who was black and unarmed, on Aug. 9 in the St. Louis suburb of Ferguson. The shooting led to sometimes-violent protests that escalated again on Nov. 24 after McCulloch announced the grand jury decision.

Ed Magee, a spokesman for St. Louis County prosecutor Bob McCulloch, declined to comment Tuesday. Messages were left with Wilson’s attorney and the clerk for McShane.

Nine white and three black jurors heard more than 70 hours of testimony from about 60 witnesses.

McCulloch said he assigned prosecutors in his office to present evidence, rather than doing it himself, because he was aware of “unfounded but growing concern that the investigation might not be fair.” McCulloch’s father was a police officer killed by a black suspect. He did not recuse himself from the investigation despite some calls for him to do so.

In December, state Rep. Karla May, a St. Louis Democrat, called for an investigation of McCulloch after he said in an interview on KTRS Radio that some witnesses obviously lied to the grand jury.

He cited a woman who claimed to have seen the shooting but “clearly wasn’t present. She recounted a story right out of the newspaper” that backed up Wilson’s version of events, he told the radio station.

Allowing such false testimony “fatally compromises the fair administration of justice,” the fund wrote to the judge.

But Ric Simmons, a professor at The Ohio State University’s Moritz College of Law, said allowing witnesses to testify unfiltered may have simply been part of McCulloch’s effort to stay neutral. Grand jurors usually hear a shorter recounting of evidence that might be presented at trial, but the Ferguson grand jury heard more extensive testimony.

“I think charitably their reason for bringing in all the evidence was so they could say, ‘Look, we showed the grand jury everything, and let them make their own decision,'” Simmons said.

The fund also cited concern about faulty legal instructions initially given by assistant prosecutors. The information was later corrected, but jurors could have been confused, the fund said.

Also Tuesday, U.S. District Judge Carol Jackson in St. Louis extended for 45 days a temporary restraining order requiring Missouri police to give protesters the chance to disperse before tear gas is deployed. Attorneys for law enforcement agencies and protesters who are suing them said they were in settlement negotiations.