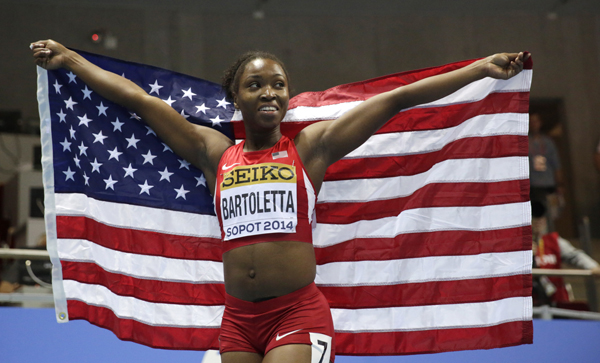 United States’ Tianna Bartoletta celebrates with the US flag after winning the bronze in the women’s 60m final during the Athletics Indoor World Championships in Sopot, Poland, Sunday, March 9, 2014. (AP Photo/Matt Dunham)

In 2005, Tianna Bartoletta (Elyria, Ohio) was a surprise world champion in Helsinki, topping the world before her 20th birthday. Ten years and one 4x100m world record later, she entered Beijing as the world leader. She lived up to her ranking, prevailing over two national records to earn her second World Outdoor gold medal in the long jump.

Bartoletta, who will turn 30 on Sunday, returned to the winner’s podium in a dramatic way. After fouling on her first attempt, Bartoletta safely put in a mark of 6.95m/22-9.75 on her second jump to sit in second place behind Ivana Spanovic’s 7.01/23-0 national record for Serbia. She fell to third when Shara Proctor catapulted herself from fourth to first with her third-round 7.07m/23-2.5, which set a British national record.

Floyd Mayweather Vs. Ronda Rousey: By The Numbers