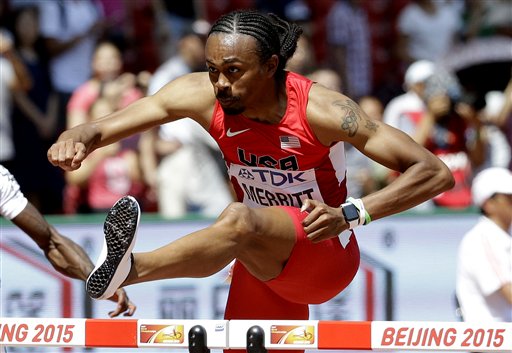 United States’ Aries Merritt competes in a mens 110m hurdles round one heat at the World Athletics Championships at the Bird’s Nest stadium in Beijing, Wednesday, Aug. 26, 2015. (AP Photo/Lee Jin-man)

BEIJING (AP) — No matter how many hurdles Aries Merritt clears this week at the world championships, he knows there’s an even bigger one waiting for him in a few days back at home — a kidney transplant.

That’s why the Olympic 110-meter hurdles champion and world-record holder is treating each race this week as if it might be his last. With his kidney function less than 20 percent, Merritt will have surgery on Sept. 1 — four days after the final in his event. His sister, LaToya Hubbard, is donating one of her kidneys.

Through all of this, Merritt is trying to keep his focus on the obstacles in his lane, not the pending one. So far, he’s off to a fast start, winning his heat Wednesday and turning in the second-best time, just .10 seconds behind teammate David Oliver.

“It’s very scary. It’s a surgery,” Merritt said. “In actuality, this could potentially be my last time competing, if things don’t go smoothly. In the back of my mind, I’m thinking of that.

“For right now, though, I’m thinking about the championships. One race at a time.”

Merritt first began to feel sick after the 2013 world championships, he told the IAAF in a profile piece for its website. That’s when he was informed by doctors he had a rare genetic disorder and spent from October 2013 to late April 2014 in the hospital.

Because of his illness, Merritt hasn’t been able to eat properly. His weight is down considerably since he captured gold at the 2012 London Olympics and set the world record of 12.80 seconds.

“There’s just a lot that goes into having a kidney disorder,” Merritt explained. “You’re tired and you’re not at 100 percent energy.”

Despite his health condition, he insisted he’s not here simply to race, but to win.

“In my heart of hearts, I think I can come out with some hardware,” he said. “All I know is I’d hate to be home, sitting in bed, thinking that I’m about to have surgery, that I’m so nervous. The championships are helping me get through this, helping me not focus on the procedure.”

Merritt will have surgery in Phoenix. His sister is already there, awaiting his return.

“She’s going to give me life,” Merritt said. “This is all very stressful, but here I am anyway.”

Merritt is holding out hope that he may be back on his feet in no time and envisions being in the starting blocks at the Olympics next year in Rio de Janeiro to defend his title.

“To be able to run for my own mental sanity is very rewarding,” Merritt said. “I’m focusing on these championships to not think about the transplant. After the championships are done, then I’ll focus on it.”

This story has been corrected to reflect that Merritt will have surgery four days after the 110-meter hurdles final, not three days.