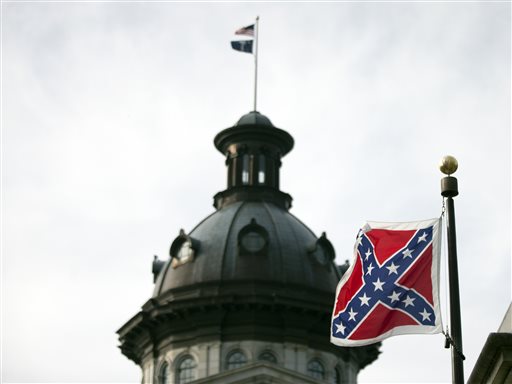 A Confederate battle flag flies in front of the South Carolina statehouse Wednesday, July 8, 2015, in Columbia, S.C. The House is expected to debate a measure Wednesday that would remove the flag from the Capitol grounds. (AP Photo/John Bazemore)

WASHINGTON (NNPA) – Five days after South Carolina retired the Confederate flag with much fanfare, a small group of protesters in Oklahoma City greeted President Barack Obama with Confederate flags. The following weekend, Ku Klux Klan members in Charleston, S.C. brandished both Confederate and Nazi flags for a rally at the capitol

It’s an appropriate reflection of the way American culture values symbolism, even when it doesn’t line up with reality.

“The problem is even though we see these symbols [and] events [such as] the removal of the Confederate flag…it only serves to remind us that deep down inside, these are still only symbols, gestures even,” said Tewodross Melchishua, award-winning filmmaker and visual artist, and professor at Bowie State University in Maryland.

“The systems of White supremacy, bigotry, racism and oppression still remain at the core of this country. The symbols are removed but we know deep down inside that the attitudes and beliefs behind them remain.”

But Black America suffers the same attachment to these symbols, for better or for worse.

From the significance of Black church burnings, to Serena Williams’ dominance, Black people often attach larger-than-life meaning to people, objects, and events. In some ways it is an essential part of Black culture, and a means of empowerment. Karanja Keita Carroll, professor of Black Studies at the State University of New York-New Paltz, points out that the Black experience in America has made this kind of symbolism necessary.

“Our unique circumstances within the United States, being victims of White supremacy and having very minimal representation of who we are – the best of who we are – forces us to emphasize, highlight, and uplift those people who represent us, and thus function as a symbol for who we are,” said Carroll, who is also the associate editor of the Journal of Pan African Studies.

In other words, lack of positive representation in mainstream society has made conditions ripe for overreliance on and defense of Black public figures.

“As people of African descent, we naturally gravitate to, use and respond to symbol and metaphor. It is indeed subconscious but also a subliminal means of communication and signifying, which is also rooted in our oral traditions, language, music, fashion and visual culture,” Melchishua explained. “We are still bombarded with negative images of our people. We reconcile this by uplifting ourselves and defending our figures, icons, sometimes for the good and some times for the bad.”

The bad side manifests when all that uplifting backfires. As Black America puts people, things, and events on a pedestal, the possibility for disappointment looms large. The latest example, of course, is Bill Cosby and his renewed sexual assault scandal.

“It’s a double-edged sword because that representation can quickly turn into misrepresentation. There’s something old people say – just because you’re my skin doesn’t mean you’re my kin,” Carroll said. “The Cosby situation is interesting, to say the least, because prior to this, he was saying things like Black people need to teach their children to read…need to stop giving their children ‘ghetto’ names…and a whole bunch of stuff that devalues our existence. I don’t know if Cosby represents us.”

The other downfall is in the lack of control of our symbols and images. Black culture sometimes becomes marketable in the mainstream – but only in White hands. Last year saw the birth of the term, “Columbusing” – a new word for the age-old practice of Whites “discovering” things that people of color have pioneered, or already know.

Carroll said, “I think that symbols historically, for African people, from the mdw ntr [hieroglyphs] found within Egypt, to Adinkra symbols found within Ghana…but we need to make sure the symbols represent our political, social, and cultural image as a community.”

Both Carroll and Melchishua agree that exalting people and objects as representative or heroic isn’t a bad thing in itself, but it is important to support this with knowledge, critical thinking, and self-determination.

“These events mean something different to the mainstream because the narrative is always being changed but not by us and usually not with our permission,” Melchishua explained. “I would add that as a country we are very ignorant of history. The only way to truly reconcile this is with having a critical study of history and to challenge all symbols; those we have created within our own community, and those that have been imposed upon us.”

How We’re Failing Sandra Bland: Mainstream Feminists Need to Do More to Fight for Women of Color