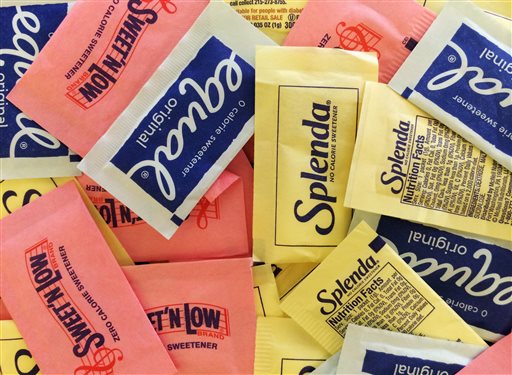 Artificial sweeteners are displayed, on Wednesday, Sept. 17, 2014, in New York. Artificial sweeteners may set the stage for diabetes in some people by hampering the way their bodies handle sugar, according to results of a study released Wednesday by the journal Nature. (AP Photo/Jenny Kane)

NEW YORK (AP) — Using artificial sweeteners may set the stage for diabetes in some people by hampering the way their bodies handle sugar, suggests a preliminary study done mostly in mice.

The authors said they are not recommending any changes in how people use artificial sweeteners based on their study, which included some human experiments. The researchers and outside experts said more study is needed, while industry groups called the research limited and said other evidence shows sweeteners are safe and useful for weight control.

The study from researchers in Israel was released Wednesday by the journal Nature.

The work suggests the sweeteners change the composition of normal, beneficial bacteria in the gut. That appears to hamper how well the body handles sugar in the diet, which in turn can result in higher blood sugar levels. This impairment, called glucose intolerance, can eventually lead to diabetes.

Some experts who didn’t participate in the work urged caution in interpreting the results.

James Hill, an obesity expert at the University of Colorado, called the work good science. Still, overall, “I do not think there is enough data yet to lead to a definitive conclusion about artificial sweeteners and the body’s handling of sugar,” he wrote in an email.

“I certainly do not think there is sufficient evidence to conclude that they are harmful.”

But Yanina Pepino of Washington University in St. Louis said the results make a convincing case that sweeteners hamper the body’s handling of sugar by altering gut bacteria. And it adds to her belief that sweeteners and sugar should be used in moderation, especially by children, she said.

Researchers began by testing three widely used sweeteners: saccharin, sold for example as Sweet ‘N Low; sucralose, sold as Splenda, and aspartame, sold for example as NutraSweet, in 20 mice. Some animals got one of those substances in their water, and others got sugar water or just water. After 11 weeks, researchers gave all the mice a dose of sugar and monitored the response in their blood sugar levels.

The mice that initially got sugar showed about the same response as those that got plain water. But mice that got any of the sweeteners showed markedly higher blood sugar levels, indicating impairment in handling of the sugar dose. Further mouse experiments linked that outcome to an effect on gut bacteria.

To gain some preliminary information on people, the researchers turned to 381 non-diabetic volunteers who filled out a questionnaire that estimated their consumption of artificial sweeteners. Forty participants who had the most showed evidence of higher blood sugar than 236 non-users.

In another preliminary test, researchers gave saccharin for a week to seven healthy volunteers who normally don’t consume sweeteners. Four showed a decline in their ability to handle sugar over the course of the week. The makeup of their gut bacteria changed markedly over the week, while that of other three changed little.

Overall, the results suggest that some people may be affected by artificial sweeteners, said one of the researchers, Dr. Eran Elinav of the Weizmann Institute of Science in Rehovet, Israel.

Christopher Gardner, a nutrition expert at Stanford University who didn’t participate in the study, said saccharin doses given the volunteers were within federal dietary guidelines but still much higher than what a typical person would consume — the equivalent of 42 12-once sodas a day for a person weighing 150 pounds.

In a statement, the Food and Drug Administration said the sweeteners “have been thoroughly studied and have a reasonable certainty of no harm to consumers.”

The Calorie Control Council, an industry group that represents the manufacturers of sweeteners and the products they’re used in, said the study has limitations that diminish its applicability to people.

Malcolm Ritter can be followed at http://www.twitter.com/malcolmritter

Obama’s Ebola Response: Is it Enough, and in Time?