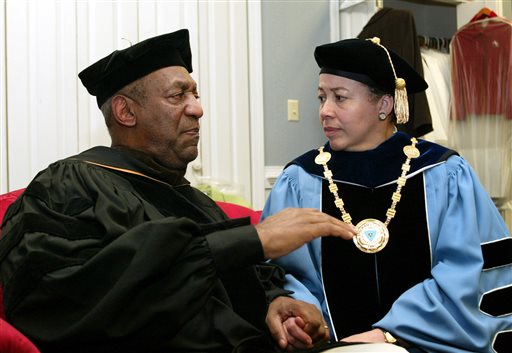 In this May 14, 2006 file photo, keynote speaker Bill Cosby, left, and Spelman College President Dr. Beverly Tatum talk before the start of commencement at the school in Atlanta. (AP Photo/W.A. Harewood, File)

The historically black college, which has had strong ties to Cosby Show actor for decades, is discontinuing its endowed professorship with the comedian after recent details emerged from his testimony in a sexual-assault lawsuit.

In a deposition from 10 years ago, leaked to media this week, Cosby admitted to obtaining prescriptions of a sedative to give to women he sought for sex, seducing young women by pretending to care for them, and paying off women to keep his wife, Camille, from finding out about his affairs.

“The William and Camille Olivia Hanks Cosby Endowed Professorship at Spelman College has been discontinued and related funds have been returned to the Clara Elizabeth Jackson Carter Foundation,” said Spelman spokesperson Audrey Arthur in a statement to USA TODAY on Friday.