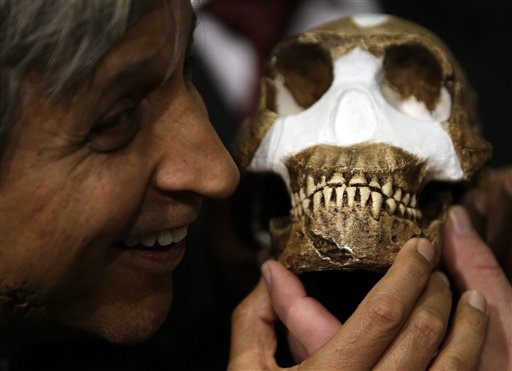 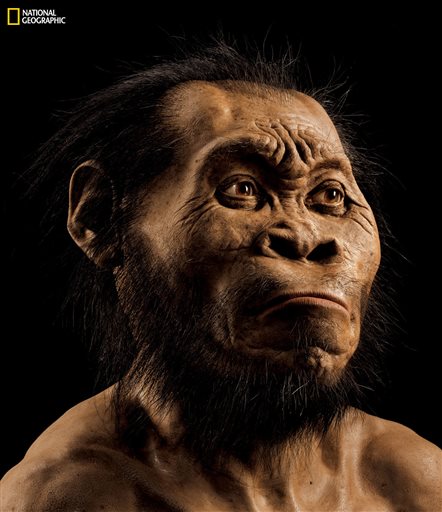 This March 2015 photo provided by National Geographic from their October 2015 issue shows a reconstruction of Homo naledi’s face by paleoartist John Gurche at his studio in Trumansburg, N.Y. (Mark Thiessen/National Geographic via AP)

(AFP.com) – Some prominent South Africans have dismissed the discovery of a new human ancestor as a racist theory designed to cast Africans as “subhuman,” an opinion that resonates in a country deeply bruised by apartheid.

“No one will dig old monkey bones to back up a theory that I was once a baboon. Sorry,” said Zwelinzima Vavi, former general secretary of the powerful trade union group Cosatu, a faithful ally of the ruling African National Congress (ANC).

“I am no grandchild of any ape, monkey or baboon — finish en klaar (Afrikaans for “that’s it”),” he said on his Twitter account, which is followed by more than 300,000 people. His comments were backed by the South African Council of Churches (SACC), which was historically involved in the fight against apartheid.

Vavi recalled that when South Africa was under apartheid rule he was a target of racist remarks: “I been also called a baboon all my life so did my father and his fathers.”

Apartheid ended in 1994 after Nelson Mandela was elected as the country’s first black president in a democratic South Africa.

Vavi’s comments came after last week’s discovery of Homo naledi, described by scientists as a new distant ancestor of humans.

The discovery of the ancient relative generated a huge amount of international interest.

But the South African backlash has perplexed people around the world at a time when Darwin’s theory of evolution is widely accepted as fact.