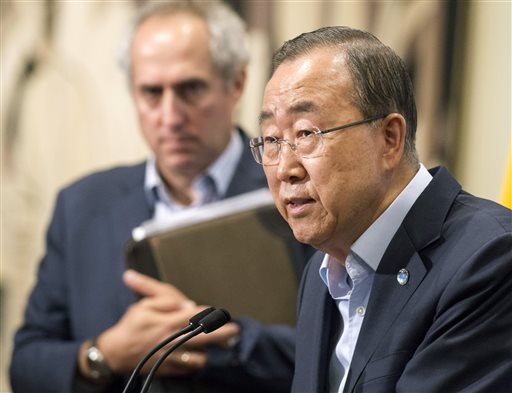 In this photo provided by the United Nations, United Nations Secretary General Ban Ki-moon addresses the media outside the Security Council chambers at U.N. Headquarters, Wednesday, Aug. 12, 2015, where he announced the firing of the head of the U.N. peacekeeping mission in the Central African Republic. Babacar Gaye, of Senegal, was terminated over the force’s handling of dozens of sexual and other misconduct allegations, including rape and killing, in the year and a half of its existence. (Eskinder Debebe/The United Nations via AP)

The U.N. mission gave few details about the allegations other than to say that the suspect is a civilian. Thirteen of the 17 cases involve U.N. peacekeeping personnel, it said.

The U.N. mission “condemns in the strongest possible terms any instance of sexual exploitation and abuse committed by U.N. personnel in the CAR,” said the statement issued Tuesday.

Stephane Dujarric, the spokesman for the U.N. secretary-general told reporters in New York that the accused “remains in country and will not be allowed to leave the Central African Republic for the time being.”

Local authorities have been informed that the U.N. is conducting an internal investigation, said Dujarric. If the case goes forward, the person will have no U.N. immunity, he said.

Central African Republic has been rocked by violence between Muslims and Christians since mostly Muslim rebels overthrew the president in 2013. Thousands have died, while hundreds of thousands have fled to neighboring countries.

The U.N. took over peacekeeping duties from an African Union force in April 2014. Member states have the sole responsibility to prosecute their troops, but a U.N. investigative report released this summer showed that countries can take little action.

Sexual abuse allegations also have been made against members of the French peacekeeping mission, which is separate from the U.N. one trying to stabilize the country.

Associated Press writers Cara Anna at the United Nations and Krista Larson in Dakar, Senegal contributed to this report.

This version corrects the total number of allegations to 17.