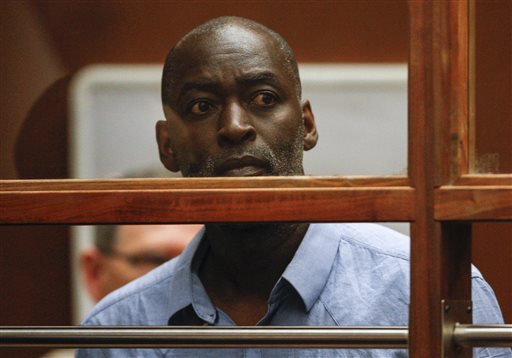 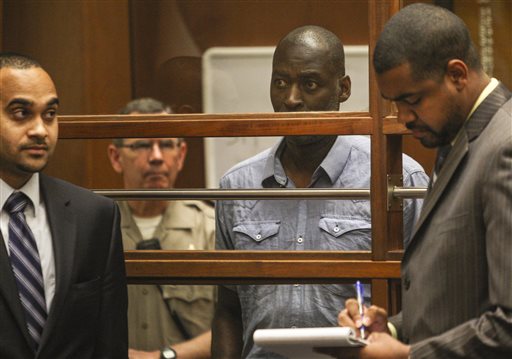 Actor Michael Jace appears in court in Los Angeles Thursday, May. 22, 2014. A judge has delayed the arraignment of Jace on a murder charge filed over his wife’s shooting death earlier this week. Attorneys for Jace, who played a police officer in the hit TV series “The Shield,” sought a continuance during the actor’s first court appearance in Los Angeles on Thursday. (AP Photo/David McNew, Pool)

LOS ANGELES (AP) — Actor Michael Jace, who played a police officer in the TV series “The Shield,” was charged with murder on Thursday in the shooting death of his wife in their Los Angeles home.

Jace, 51, appeared in court briefly and spoke just once to confirm that he wanted his arraignment delayed until a June 18 hearing.

Bail was set at $2 million. If convicted, the actor could face 50 years to life in state prison.

April Jace, 40, was shot multiple times and found dead Monday in a hallway of the family home in the modest Hyde Park neighborhood.

The couple’s two sons, both under 10, were in the house during the attack, but police said it was unclear if they had seen the attack. They have been placed with relatives.

Defense attorney Jason O. Sias declined to comment on specifics regarding the allegations against Jace but said the actor was thinking of his children.

Detectives were investigating whether the couple’s financial problems or other marital difficulties played a role in the killing that police said occurred during an argument.

Jace called the emergency dispatcher, said he’d shot his wife and was at the home when officers arrived, police Detective Dean Vinluan has said.

Vinluan said there had been no reports of domestic violence at the home. However, the actor had been under financial pressure in recent years. He declared for bankruptcy in 2011 and had been delinquent on payments as recently as December.

Jace is best known for his role as LAPD Officer Julien Lowe in “The Shield.” He also appeared on the show “Southland” and had small roles in the movies “Planet of the Apes,” ”Boogie Nights” and “Forrest Gump.”

April Jace worked as a financial aid adviser at Biola University, a private Christian school. She had two sons with Jace and another son from a previous marriage, and had worked as a school teacher.