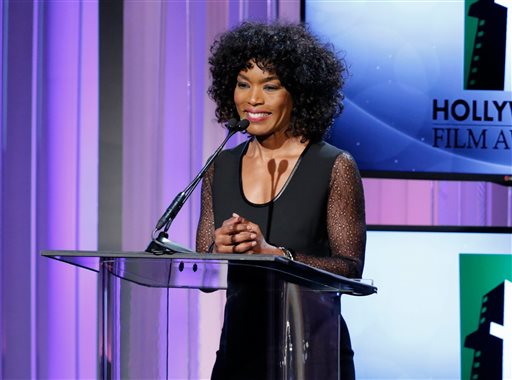 In this Oct. 21, 2013 file photo, actress Angela Bassett speaks on stage at the 17th Annual Hollywood Film Awards Gala at the Beverly Hilton Hotel in Beverly Hills, Calif. The Lifetime TV channel says it will air a movie about the relationship of Whitney Houston and Bobby Brown, with Bassett set to direct. The channel said the movie will follow the couple through their first meeting and tumultuous marriage and Houstons rise to fame. (Photo by Todd Williamson/Invision/AP)

Lifetime said Thursday that the movie will follow the couple through their first meeting and tumultuous marriage, and Houston’s rise to fame.

Brown and Houston were divorced at the time of her 2012 drowning death in a hotel bathtub at age 48. The couple’s daughter is 21-year-old Bobbi Kristina Brown.

Lifetime says Bassett will be making her directorial debut with the project.

In a statement, Bassett says she has high regard for both Houston’s and Brown’s talents and feels a responsibility in telling their story.

Lifetime says the movie, with the working title “Whitney Houston,” will air in 2015. The cast hasn’t been announced.