Movie Review: 'Dawn of the Planet of the Apes'
Advertisement 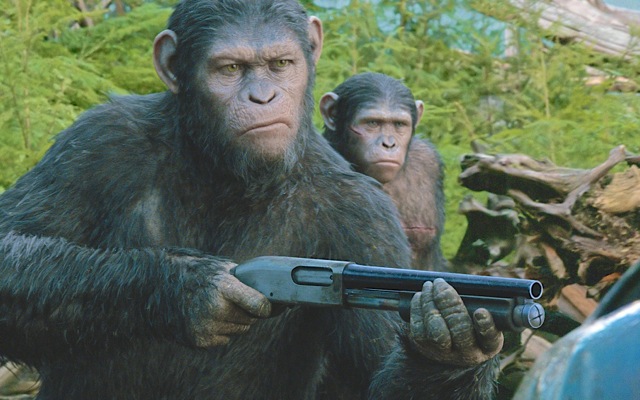 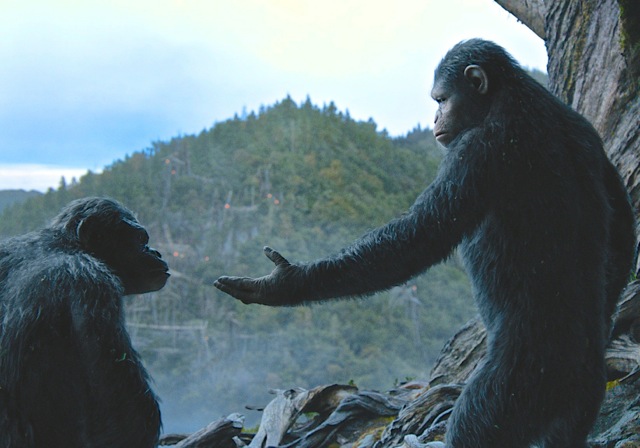 At the end of Rise of the Planet of the Apes, the 2011 version of the classic 1968 ape movie, you were left with a haunting sense that humans had gone off their rockers and apes, the aggrieved, seemed saner. The premise for Dawn of the Planet of the Apes is that neither species is perfect but maybe, though not probably, there is common ground. Endowing apes with human qualities, frailties and emotions is still an amazing spectacle 46 years after the original film.

The most fascinating aspect of this new entry is the simian colony that’s created by director Matt Reeves (Cloverfield), production designer James Chinlund (The Avengers), set decorator Amanda Moss Serino, cinematographer Michael Seresin (Harry Potter and the Prisoner of Azkaban) and a team of astute art directors. Somewhere north of the Golden Gate Bridge, miles from San Francisco, which post-apocalypse is just a skeleton of itself, is a thriving ape community. It’s something you’ve never seen before or could ever imagine. Using branches and sticks they’ve built an outpost, an outer world in Muir Woods, which looks like Sherwood Forest.

The 2000 inhabitants of the city/state are various orangutans, chimps and gorillas who have been trained and/or experimented on by humans. They can understand man’s language. Their leader is Caesar (Andy Serkis); he’s a survivor who has fashioned a kingdom where he teaches his brand of humanized governing to his followers, including his son Blue Eyes (Nick Thurston), the larger orange orangutan Maurice (Karin Konoval) and more forcibly so to his conniving lieutenant Koba (Toby Kebbell).

Back in San Francisco, in a makeshift fortress, are hundreds of human survivors of a deadly virus that has devastated the world. They are led by Dreyfus (Gary Oldman), who is determined to find a new, much-needed energy source as a he sends a team out to reconnoiter north of the bridge.

All is blissful in the forest until the interlopers invade looking for a dam that will provide a new power source. The initial encounter is rocky as a hot head human named Carver (Kirk Acevedo, TV’s Oz) is involved in a deadly incident with a young simian. The apes surround the frightened human group, which is lead by Malcolm (Jason Clarke, Zero Dark Thirty), who is accompanied by his teenage son Alexander (Kodi Smit-McPhee, The Road), his ladyfriend Ellie (Keri Russell, TV’s Felicity), who is a nurse, and Foster (Jon Eyez, American Violet) a muscular type. And so begins a series of misunderstandings, peace initiatives, trust issues and power plays that leads the simians and humans down a dangerous path.

Anytime the camera is focused on the simians, the film is simply mesmerizing. Their makeshift hierarchy is as raw and primal as that of the boys in the novel “Lord of the Flies.”  A coarse but purposeful central governing dynamic keeps order. The apes’ interactions often mimic human behavior, traits you might take for granted. Love, father-son relationships, jealousy, envy, fear, anger, scheming…

The smart script (Rick Jaffa, Amanda Silver, Mark Bomback) is filled with drama, action and missteps that snowball into revenge and carnage. Watching it evolve keeps you in a state of constant wonder. The well-crafted dialogue is sometimes prophetic or profound: Koba to Caesar after the empathetic leader has chastised him for being to aggressive: “I would do anything you ask, but we must show strength.” Later, Caesar warns Koba, “Ape not kill ape.”

The hairy mammals steal the movie. Andy Serkis, Toby Kebble and Nick Thurston play out the dynamics of the simians with all the dramatics of Shakespeare’s Julius Caesar. Their performances are indelible. Co-credit the makeup department and the special effects team (Joe Letteri is the senior visual effects supervisor in charge of Weta Digital) for making them seem so real. Clarke is decent as the lead human with a heart, but not uniquely impressive. Ditto Russell, Smit-McPhee and Oldman. Kirk Acevedo as the duplicitousness Carver stands out; he’s playing a pivotal, trouble-starting character that you will hate. That’s the mark of an actor who knows how to get under your skin.

If there is one wrinkle in the movie, it’s that the very evenly measured drama, three-dimensional characters and the stunning ape habitat outshine the decently directed action scenes. By film’s end, you may wish you had seen just one out-of-this-world, mind-boggling action sequence that made you gasp for air. That said, Dawn of the Planet of the Apes is still the best big budget summer movie of 2014.

At the end of Rise of the Planet of the Apes there was a vision of Caesar in a tree that was haunting. At this chapter’s conclusion, Caesar hints at what may happen next. Perhaps the ultimate inter-species battle? Bring it.

Whoopi Goldberg Flips Out on The View: We’re Grown-Ass Women