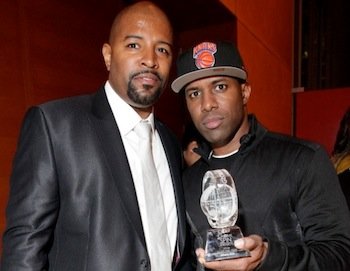 by Stacy M. Brown
Special to the NNPA from the Washington Informer

Prez is now the head of his own company, Power Moves Inc., a promotions-oriented enterprise whose clients include EA Sports, And 1, MGM Studios and others.

“I’m an entrepreneur, so for me, I didn’t get into business with less than the expectations of creating a Fortune 500 company,” said Prez, who worked with the late Notorious B.I.G., Ma$e, Black Rob, and others and who has helped to launch the careers of some of hip hops biggest stars.

Working side by side with rap impresario P. Diddy – Sean Combs – presented him with significant business opportunities and the experience he needed to become successful, he said.

“I’ve been blessed to have a company that’s continued to grow over the years. You have to stay humble or life will humble you,” Prez said. “Bad Boy helped me immensely because I was with [Diddy] in the beginning, in the early days building Combs Enterprises.

“But before there was a Sean John, a Justin’s Restaurant or a Ciroc [P. Diddy’s Vodka brand] there were a group of young hungry kids and P. Diddy has been very instrumental in my success because you can go to school and study, but there’s nothing in life like real world experience and I had a front row seat sitting in on key meetings and being a part of building something that’s a part of history” he said.

Starting out as an intern for Bad Boy Entertainment, Prez, a South Bronx native, worked his way up to becoming P. Diddy’s road manager. He eventually became vice president of promotions, earning the affectionate nickname of “P. Diddy’s Ambassador to the Streets.”

The recent unrest in Baltimore over Freddie Gray’s death reminded him of a different time, Prez said.

“I remember having a long conversation with a friend and saying that the generation before us, my parents’ generation, fought for something. They stood for something and there were causes whether it was Women’s Rights or Equal Rights for all races, they were willing to die for their beliefs and many did,” he said.

“History repeats itself. As long as the demonstrations remain pointed in terms of the message, there is hope.”

Prez has also provided another kind of hope, this time for disc jockeys who are finally receiving recognition thanks to the new Global Spin Awards the entrepreneur has founded.

“We still continue to face hardships and face obstacles. For one, the DJs themselves, we had to make this credible for them. As a friend of the DJ community for many years I understand how they think, so we had to come up with a very fair, unbiased and credible award show that the DJs themselves could not question,” he said. “We have now a Grammy Awards for the DJ and the DJ community is growing at an enormous speed. Once upon a time being a DJ wasn’t considered a true career path, now you have young men and girls who want to be a DJ and the best, like Funkmaster Flex, and others are making millions of dollars per year.”

While staying busy with his company and other interests, Prez said he stays close to his family with a son just graduating from Morehouse College in Atlanta.

“I’ve taught my son from Day 1 that you’ve got to get an education and I’ve been educating him since before he was able to speak,” he said. “I try to lead by example and who him the importance of no excuses and making things happen. To see what others don’t see. I’ve had a lot of success on a lot of levels and, as I get older, what’s important in life is the air that we breathe. Everything else is icing on the cake.”