Samsung, Apple Agree to Drop Lawsuits Outside US
Advertisement 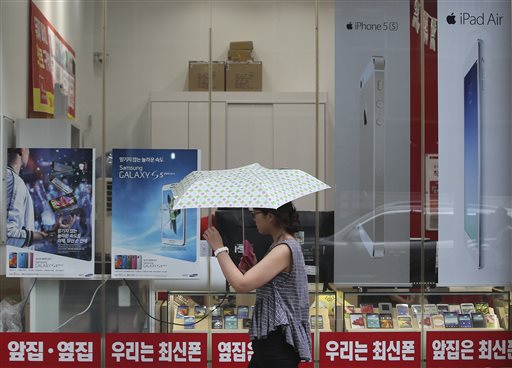 A woman walks by advertisement posters of Samsung Electronics’ Galaxy S5, Apple’s iPhone 5s and iPad Air at a mobile phone shop in Seoul, South Korea, Wednesday, Aug. 6, 2014. Samsung and Apple Inc. have agreed to end all patent lawsuits between each other outside the U.S. in a step back from three years of legal hostilities between the world’s two largest smartphone makers. (AP Photo/Ahn Young-joon)

SEOUL, South Korea (AP) — Samsung and Apple Inc. have agreed to end all patent lawsuits between each other outside the U.S. in a step back from three years of legal hostilities between the world’s two largest smartphone makers.

However, Samsung Electronics Co. said Wednesday that it and Apple will continue to pursue existing cases in U.S. courts. The two companies did not strike any cross-licensing deal.

“Samsung and Apple have agreed to drop all litigation between the two companies outside the United States,” the South Korean company said in a statement. “This agreement does not involve any licensing arrangements, and the companies are continuing to pursue the existing cases in U.S. courts.”

The announcement is a significant lessening of corporate hostilities after years of bitter patent disputes over the intellectual property rights for mobile designs and technology. The legal fights spanned about a dozen countries in Asia, North America and Europe.

Lawsuits and other legal actions by Samsung and Apple will come to an end in countries including Germany, England, France, Spain, Italy, the Netherlands, South Korea, Japan and Australia.

The patent cases in the U.S. have come with bigger awards for damages than other countries. In May, a California jury awarded Apple $119 million in a patent battle with Samsung. The same jury also ordered Apple to pay $158,400 to Samsung finding that Apple had infringed one of Samsung’s patents in creating the iPhone 4 and 5. In a separate 2012 jury verdict, Samsung was ordered to pay Apple $930 million. Samsung appealed.

Some analysts said the two companies would eventually bury the hatchet and sign a cross-licensing deal, following the usual pattern of patent cases in the technology industry. There were earlier signs that tensions had eased between two companies. The two agreed to drop their appeals at the U.S. International Trade Commission in June.

But at other times, it seemed the differences were too wide to be bridged. The chief executives of both companies reportedly met several times at the recommendation of a U.S. judge to discuss out of court settlements.

Not all outcomes from the patent actions were damaging to Samsung and Apple. While the two rivals faced damage claims and sales bans of old products here and there, Samsung vaulted to the leading position in the global smartphone market during the last three years.

The series of high-stake lawsuits over some of the world’s most popular gadgets began in April, 2011 when Apple accused Samsung, the maker of Galaxy phones, of slavishly copying the iPhone. Samsung responded by charging Apple of stealing its mobile technology.