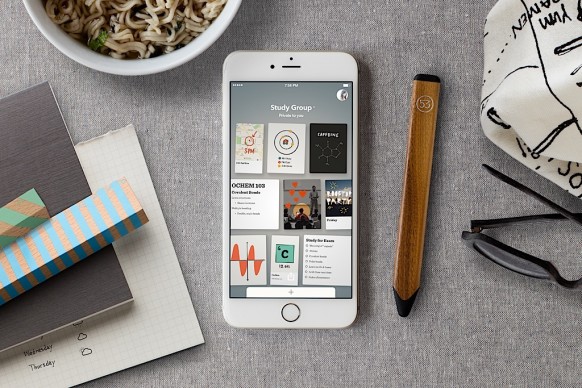 (Wired) – Georg Petschnigg is distracted. He’s trying to tell me about his company’s new app—Paper for iPhone, an adaptation and re-thinking of the wildly celebrated iPad sketching app—but the gold Galaxy Note 5 sitting on the table keeps catching the CEO’s eye. “Man, that would be a really nice form factor for this app,” he says. A few minutes later: “I wish I could just—whoosh!—wave the magic hand” and move the app from the iPhone 6 in his hand to the Note 5.

The Note would be perfect. It has a big, high-res screen; a pressure-sensitive stylus; and a self-selecting set of users who buy the phone because it promises Maximum Productivity. And productivity, perhaps even more than the sketching or doodling FiftyThree’s app has become known for, is what the new Paper is all about. Same goes for the new iPad Pro, by the way, or the new Apple Pencil, the stylus that mimics FiftyThree’s device both in purpose and in name. But Petschnigg isn’t worried—his company will support the new Pencil, too, and he hopes Apple’s foray into stylus territory will be good for everyone. Plus, he thinks he’s onto something better anyway.

“We’ve always been about capturing ideas,” Petschnigg says. When FiftyThree decided it wanted to create something for the iPhone, they started to look at what people do differently on a phone. The team discovered two things: People spend a lot of time composing notes-to-self, and a lot of those notes are images. Not just pretty and well-composed photos, either: screenshots of text, pictures of signs, all sorts of hacky capture methods. “We started combining that,” he says, “with this basic truth they’ll teach you in design school. That is, if you want to remember an idea, you have to put text and images together.”