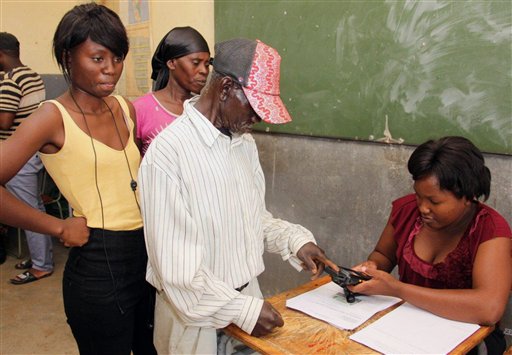 A man dips his finger in the ink as Namibians queue to cast their votes, in the country’s elections near Rundu, Namibia, Friday, Nov. 28, 2014. The southern African nation of Namibia on Friday voted in parliamentary and presidential elections expected to deliver a comfortable win for the ruling party, which has been in power since independence in 1990. (AP Photo/Dirk Heinrich)

JOHANNESBURG (AP) — The southern African nation of Namibia on Friday voted in parliamentary and presidential elections expected to deliver a comfortable win for the ruling party, which has been in power since independence in 1990.

Some 1.2 million Namibians, about half the population, were eligible to vote in the elections at several thousand polling stations, which are using electronic voting machines instead of the old ballot paper system. Sixteen political parties and nine presidential candidates were the race; final results were expected within 24 hours of the 9 p.m. (1900 GMT) close of voting.

The presidential candidate of the ruling SWAPO party is Prime Minister Hage Geingob, who campaigned for independence decades ago at the United Nations. If elected, he would succeed President Hifikepunye Pohamba, who is stepping down after serving two five-year terms.

Namibia enjoys political stability and benefits from major diamond and uranium reserves as well as revenue from tourists drawn to its stark landscapes. Geingob, the prime minister, has acknowledged that Namibia still has high poverty and lacks adequate health facilities.

Robert Besseling, an analyst at IHS Country Risk, has predicted that a smooth transition of power to Geingob would indicate continuity in “pro-business” policies in mining and energy. However, Besseling wrote in an analysis that a Geingob presidency could trigger more factionalism within the ruling party as well as a higher risk of labor unrest.

Geingob would be the first president from the ethnic Damara minority. Pohamba, the current president, belongs to the Ovambo, the biggest ethnic group in Namibia.