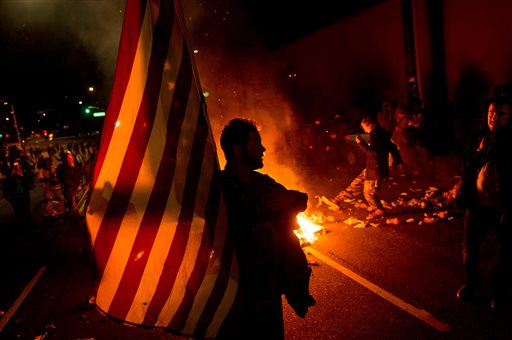 James Cartmill holds an American flag while protesting in Oakland, Calif., on Monday, Nov. 24, 2014, after the announcement that a grand jury decided not to indict Ferguson police officer Darren Wilson in the fatal shooting of Michael Brown, an unarmed 18-year-old. Several thousand protesters marched through Oakland with some shutting down freeways, looting, burning garbage and smashing windows. (AP Photo/Noah Berger)

The comments by the Russian Foreign Ministry’s human rights envoy, Konstantin Dolgov, were among the sharpest from a foreign official as images of violent protests in Ferguson topped newscasts around the world. The protests came after a grand jury’s decision not to indict a white police officer in the killing of an unarmed black man, 18-year-old Michael Brown.

“The developments in Ferguson and other cities highlight serious challenges to the American society and its stability,” Dolgov said in remarks broadcast by Russian state television.

Moscow appeared to relish turning the tables on the U.S. after repeated U.S. criticism of Russia’s rights record and its policies toward Ukraine. Relations between the two nations are at their lowest point since the Cold War due to the crisis in Ukraine.

All of Russia’s state-controlled nationwide television stations began their newscasts with the footage of street violence in Ferguson, casting it as mounting public anger against the discrimination, injustice and police brutality found in the United States.

“Racial discrimination, racial and ethnic tensions are major challenges to the American democracy, to stability and integrity of the American society,” Dolgov said. “We may only hope that U.S. authorities seriously deal with those issues and other serious challenges in the human rights field in their own country and stop what they have been doing all along recently — playing an aggressive mentor lecturing other countries about how to meet human rights standards.”

U.N. Secretary-General Ban Ki-moon appealed to Americans who were disappointed at the grand jury’s decision “to refrain from any violence” and echoed the appeal by Brown’s parents “to turn this difficult time into a positive moment for change,” U.N. spokesman Stephane Dujarric said.

The U.N. High Commissioner for Human Rights, Zeid Raad al-Hussein, said he would have to see the evidence to be able to judge the grand jury’s verdict. Still he voiced concern at the “disproportionate” number of young black Americans who die in encounters with police officers and the high rate of blacks in U.S. prisons and on death row.

In a statement Tuesday, Zeid urged calm but said clearly there is a “deep and festering lack of confidence in the fairness of the (U.S.) justice and law enforcement systems.”

Officials in most nations avoided the sensitive subject. In China, where authorities don’t welcome scrutiny of the police, the state-run media reported prominently on the Ferguson decision but added little or no commentary. There also appeared to be moves to stifle discussion of the Ferguson news online in China.

Asked whether China, a frequent target of U.S. criticism over its human rights record, had any comment on the grand jury’s decision, Chinese Foreign Ministry spokeswoman Hua Chunying said the case is an internal U.S. affair but took the opportunity to note that no country is perfect regarding human rights.

“We can learn from each other in this area,” she said.

On Twitter, well-known jihadis used the grand jury’s decision in recruitment efforts, saying it was the result of America’s racism and that jihad and revolution would be fitting responses, according to the SITE Intelligence Group.

The group, which analyzes international terrorists’ messages, quoted a tweet by a prominent Dutch jihadi in Syria as saying: “March against tyranny and arm yourselves against the true terrorists of our time: The US Government. #FergusonDecision.”

In Hungary, where the government has faced U.S. criticism for its crackdown on civil rights groups, news from Ferguson received prominent coverage on state television, which noted “it was predictable that the decision would enrage millions.”

In France, Justice Minister Christiane Taubira, who has faced racial slurs herself since taking office in 2012, wrote a series of emotional English- and French-language tweets and Facebook posts in response to the Ferguson decision.

Lori Hinnant and Angela Charlton in Paris, John Heilprin in Geneva, Laura Mills in Moscow, Pablo Gorondi in Budapest, Hungary, and Edith M. Lederer at the United Nations contributed to this report.

Campaigning Under Way in Liberia Despite Ebola