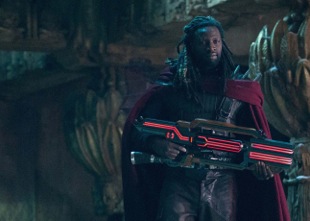 Omar Sy plays the mutant Bishop in the action/fantasy/film X-Men: Future Past

If hindsight is 20/20, the X-Men have perfect vision in this back-to-the-future reboot of a sagging franchise that needed new life. Does it get the resuscitation it needs? Yes. Is it fascinating? Maybe. Is it dark and brooding? Yes. Is it fun to watch? Maybe. Comic book nerds will rejoice. General audiences may wish they were watching the more light-hearted Marvel’s The Avengers, because these angst-riddled super heroes aren’t nearly as jovial.

Somewhere in the future, huge mechanized warriors called Sentinels hunt, maim and kill mutants and their sympathizers. They are the brainchild of a diabolical scientist, Dr. Trask (Peter Dinklage, Game of Thrones) who used DNA from the feisty mutant Raven/Mystique (Jennifer Lawrence) to clone his deadly, seemingly indestructible army. The only way to stop the carnage is for someone to go back in time, to the ‘70s, when Mystique sets in motion a chain of events that brings the apocalypse.

The mutants’ last stand is in a refuge in China, a fortress that is under imminent attack. The elder leader Professor Charles Xavier (Patrick Stewart) and his longtime cohort/arch rival Erik Lensher/Magneto (Ian McKellan) decide to send someone back to the past to fix the future. They draw on the powers of Kitty Pryde (Ellen Page), who can transport a person’s psyche back in time. The wise men choose the rambunctious Logan/Wolverine (Hugh Jackman) as their conduit. It’s up to the hairy man to convince the younger ‘70s personae of Professor X (James McAvoy) and Magneto (Michael Fassbender) to work with him to dissuade Mystique.  A complicated task since both young gentlemen flirt with her.

The trip back to the 1970s recalls the days of big cars, big mustaches, bellbottoms and President Nixon. The waltz down memory lane gives filmmaker Bryan Singer a fun canvas to display his dexterity as an astute director after the franchise took a beating under the guidance of director Brett Ratner and his miscalculated X-Men: Last Stand. Singer, who directed the original X-Men and then X-Men 2, is the right man to hold the reigns, though not the perfect one.

Singer’s daring sense of humor and bravado are on view in a Pentagon kitchen scene in which Logan has enlisted the help of Peter/Quicksilver (Evan Peters), a mutant who moves faster than the speed of sound. Soldiers fire bullets during an elaborate escape. The silver-haired speed nymph flies around in what seems like stop motion. He tastes some of the food, changes the positions of the assailants’ fists, repositions guns and redirects bullets, all in a flash. In less time than it takes a heart to beat. When he’s through with his handiwork, motion continues in ways that surprise.

It’s an ingenious moment that exemplifies in one instance Singer’s artistry, Nigel Thomas Sigel’s vivid cinematography, John Ottman’s tight editing, John Myhre’s evocative production design, Gordan Sim’s near-perfect set decoration and the smart art direction of Vincent Gingras-Liberali, Michele Laliberte and Felix Lariviere-Charron. However, not every scene in the film is this uncanny. In fact the ‘70s sequences are far more captivating than any that take place in the future, where the fight scenes between the deadly robotic Sentinels and the mutants are never more than ho-hum.

Simon Kinberg’s screenplay, which is adapted somewhat from an “X-Men” comic book story credited to Chris Claremont and John Byrne, follows a blueprint by screenwriter Jane Goldman (X-Men: First Class) and is better at developing the characters than a coherent, uncomplicated storyline. He gives the main mutants strong roots, which in turn gives the very impressive actors the chance to wrestle with internal conflict, subterfuge, duplicity, rage, courage and blind ambition.

You can never trust Magneto, the alpha male. As Fassbinder swaggers through the film moving objects at will, his motives remain secretive and devious.  Lawrence as Mystique can’t control her impulsive behavior. The young Professor X’s self-doubt lets McAvoy play the inherent insecurities with perpetual anguish. Wolverine is the one character that has a sly, magnetic wit.  Hugh Jackman’s acting, after his turn in Les Miserables, has climbed to a new plateau. He’s intense, assured and he knows how to stare into the lens and grab a viewer’s attention.  His performance is the glue that holds this film together.  He’s the man.

There are a host of other mutants from the first and the previous generation darting about. But their screen time is so minimal it’s almost a shame. Chief among the thespians who need to find an agent who can get them off the bench are Omar Sy as Bishop, Halle Berry as Storm and Bingbing Fan as Blink.

Sometimes you have to sit through laborious minutes of exposition to get to the attention-grabbing action scenes. Be patient, they come—although the final climatic moments are engaging but not a thrill-a-minute experience.

Overall, the film holds itself in such high esteem; it often feels stuffy and self-important. Comic book nerds may understand the gravity of the situation. A novice, who stumbles into a multiplex looking for that “fun” summer event movie, might not be so enamored. Will X-Men: Days of Future Past do the billion-dollar international box office that Marvel’s The Avengers did? Maybe. That’s a debate worth having at the concession stand, over an oversized-popcorn, with a large soda and a box of Skittles.