Movie Review: Get On Up By Dwight Brown
Advertisement 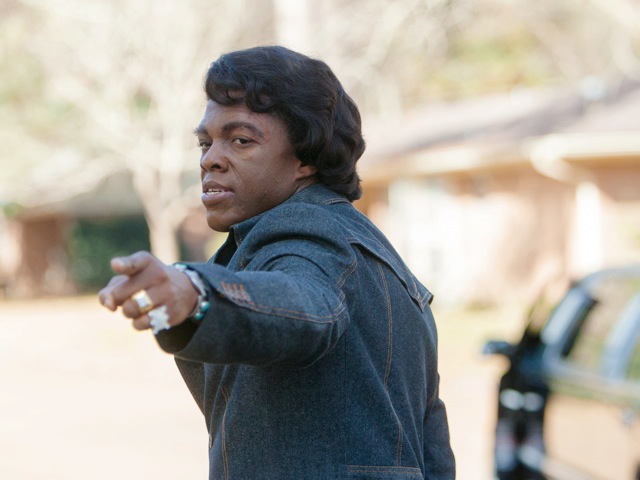 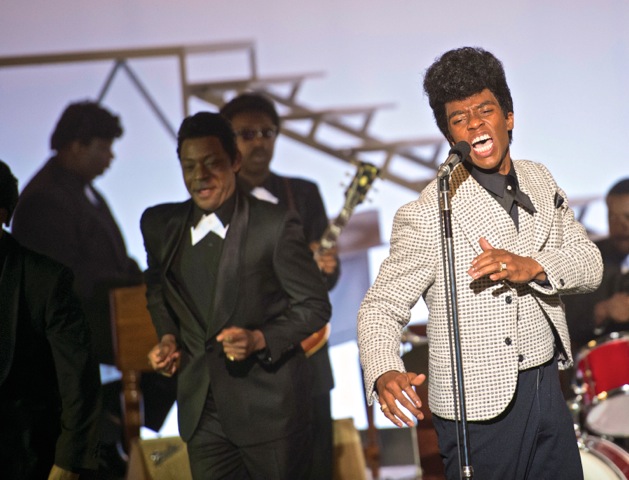 This much-awaited bio-film tells you some things you already knew: James Brown could sing the funk out of a song. It also shows you some things you might not have grasped: troubled boys grow up to be troubled men. Warts and all, in fits and starts, finally the Hardest Working Man in Show Business gets his story told.

This project had been in development for years. It took on new momentum when Browns’ family approached Mick Jagger of the Rolling Stones about shepherding the production, which he did with producer Brian Grazer (American Gangster, Frost/Nixon); the Stones and James Brown once toured together. The producers hired director Tate Taylor, who made the politically incorrect and historically inept, The Help but also the strong drama Winter’s Bone. Taylor reassembled his tech crew from The Help, which included: the ingenious costume designer Sharen Davis (Dreamgirls), director of photography Stephen Goldblatt (Angels in America), production designer Mark Ricker (Julie & Julia), with the new addition of editor Michael McCusker (The Amazing Spider Man). The technical credits for the movie are solid, with the costumes and set design standing out.

As the film unfolds, a young James Brown (Jordan and Jamarion Scott) lives with his mother Susie (Viola Davis) and his father Joe (Lennie James, Snatch) in a shack in backwoods South Carolina. Mom and dad have a torrid and abusive relationship. At a tender age, she abandons James. One day dad drops him off at his Aunt Honey’s (Octavia Spencer) whorehouse. James becomes a barker, driving customers to Honey’s house of prostitution. James can’t stay out of a trouble as a kid and as a teen (Chadwick Boseman, 42) his law-breaking ways get him a prison sentence.  Behind bars he meets a gospel group headed by Bobby Byrd (Nelsan Ellis, True Blood). Before you can count, a-one-and-a-two, Brown is paroled into Byrd’s home and he becomes the lead singer of gospel-turned-soul group called “The Flames.” That chance meeting turns Brown’s life around.

Screenwriters Jez and John-Henry Butterworth (Edge of Tomorrow) with the help of a story by Steven Baigelman (Feeling Minnesota) infuse a lot of facts, events, tragedy, family drama and music group dynamics into the storyline. You learn a lot about the psyche of a world-renown musician, who, even after so much success, got arrested and imprisoned in 1988 for leading South Carolina police on a PCP-induced car-chase. 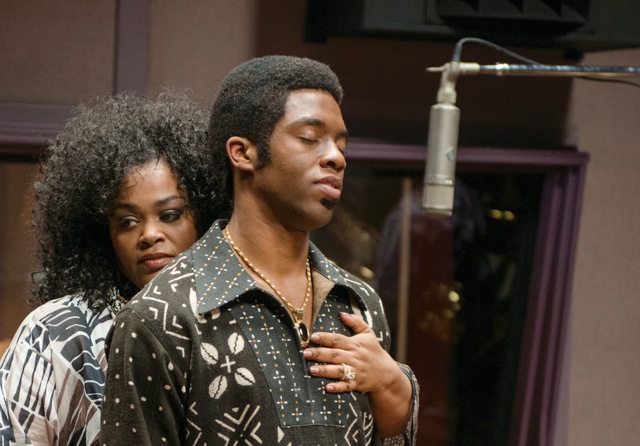 Chadwick Boseman and Jill Scott in “Get On Up.” (Courtesy photo)

Between director Tate Taylor, the writers and the editor Michael McCusker, someone made the misguided decision to tell this story not as a straightforward bio film but as a disconcerting series of flashbacks, that feel more random than rhythmic. Long after Brown is a full-grown man, there are clips of him interspersed as a kid, as if his childhood haunted him into his later years.  Once you see young James pulling the shoes of a lynched man and saving them for himself, you know he has a tortured soul.  You don’t have to be beaten over the head, for 133 minutes, with flashbacks.

No good deed goes unpunished. Bobby Byrd should not have been surprised the day James Brown and his manager Ben Bart (Dan Aykroyd) told the group that their name was changing from the Famous Flames to James Brown and the Famous Flames.  Disenchanted, the guys left him.  But Brown found and assembled another back-up group as he pushed his career forward with hits like; It’s a Man’s World, Payback, Sex Machine, I Got You, and Get Up Offa That Thing.  And, he had his share of women, wives (Jill Scott, Jacinte Blankenship) and children, too.

The over-complicated storytelling wreaks havoc on the momentum. The heavy-handed imagery will make you yawn. The films girth may have you checking your watch. What saves this movie from itself is a tour-de-force by Chadwick Boseman that figuratively pulls Brown out of the grave to do one more performance. With the aide of key hair stylist Shannon Bakeman and top-notch make-up artists, Boseman becomes Brown as much as Meryl Streep became Margaret Thatcher. The gestures, voice, inflections, movement, dancing and bravado are so James Brown: “You might not have bought my record, but every record you got has a piece of me in it.”

The costumes, set design and acting would be empty gestures without the music. James Brown died December 25, 2006. But his music, spirit, black power consciousness and a six-decade career with powerful songs and unforgettable concerts (from the Apollo Theater to the riot-soothing 1968 concert at the Boston Garden) remain imbedded in music history and American culture.

Seeing Get On Up is like attending a long-winded memorial service. You know you need to go.  You know you need to be respectful. Even if the deacons of the church didn’t assemble the best program, it’s not about the incidentals. It’s about sharing and reclaiming the memory of the Godfather of Soul—the man whose music put a smile on your face and a kick in your step.

How ‘Get On Up’ Got Done