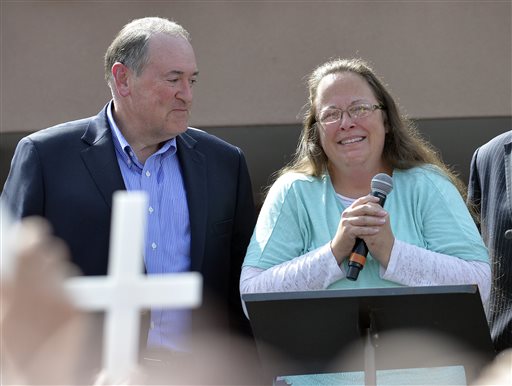 Rowan County Clerk Kim Davis, with Republican presidential candidate Mike Huckabee, left, at her side, speaks after being released from the Carter County Detention Center, Tuesday, Sept. 8, 2015, in Grayson, Ky. Davis, the Kentucky county clerk who was jailed for refusing to issue marriage licenses to gay couples, was released Tuesday after five days behind bars. (AP Photo/Timothy D. Easley)

(The Washington Post) – Rowan County, Ky., clerk Kim Davis may have a dream about honoring her religion by refusing marriage licenses to same-sex couples, but she is no Martin Luther King or Rosa Parks, critics say.

“Now it must be noted that Mrs. Davis is not, like Mrs. Parks, being punished for civil disobedience, but rather for an act of brazen and bold civil obedience,” wrote Fischer, who did not respond to requests for further comment. “Kim Davis languishes in jail in our day as Rosa Parks did in hers,” he wrote before Davis was released from a jail in Grayson, Ky.

Huckabee: Dred Scott Decision ‘Remains To This Day The Law Of The Land’