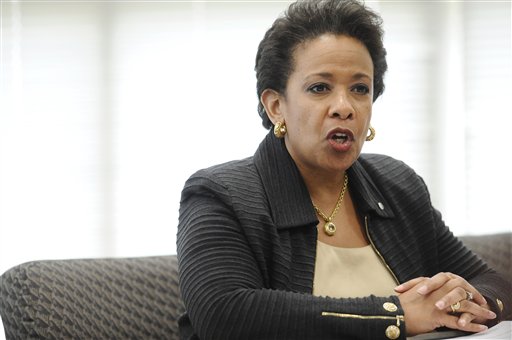 In this July 21, 2015 file photo, Attorney General Loretta Lynch speaks in East Haven, Conn. Lynch is voicing her support for police officers in a speech before the National Fraternal Order of Police. (AP Photo/Jessica Hill, File)

WASHINGTON (AP) — Despite the many challenges in bringing such cases, the Justice Department is renewing its commitment to prosecuting corporate executives for financial misdeeds, Deputy Attorney General Sally Yates said Thursday.

In a warning shot to Wall Street, Yates unveiled new policies to guide federal prosecutors in bringing more criminal cases against individuals even as she acknowledged that the Justice Department has, at times, struggled to hold executives accountable for fraud that occurs at their companies.

“Crime is crime. And it is our obligation at the Justice Department to ensure that we are holding lawbreakers accountable regardless of whether they commit their crimes on the street corner or in the boardroom,” Yates said at New York University’s law school.

“Americans should never believe, even incorrectly, that one’s criminal activity will go unpunished simply because it was committed on behalf of a corporation.”

The new guidance comes amid persistent criticism that the department, even while negotiating multi-billion-dollar settlements with large banks, has not been aggressive enough in prosecuting individuals for financial misconduct — including after the mortgage crisis that devastated the U.S. economy.

It’s not clear how far the new directives, some of which are already in place, will go in easing the barriers that have long thwarted successful prosecutions of high-ranking corporate executives.

“It’s impossible to tell whether this will mean more prosecutions,” said Lee Richards, a former Justice Department prosecutor who represents companies and corporate officers. “I think there’s an enormous amount of political pressure in the department in that regard,” he added, though much will depend on how the guidance is carried out.

But taken together, the policies are designed to put the government in a stronger bargaining posture in corporate fraud investigations and to reduce leverage companies have in shielding individual executives from prosecution.

Perhaps the most striking element of the guidance mandates that companies that want credit for cooperating with the government must turn over evidence of wrongdoing by specific individuals. Previously, companies could be credited for disclosing improper practices at the corporate level even if they didn’t identify individuals suspected of wrongdoing.

“It’s all or nothing. No more picking and choosing what gets disclosed,” Yates said.

William Lawler, a white-collar criminal defense lawyer, said that directive sets up a “zero-sum game” that could lead to more individuals being prosecuted as well as more companies being motivated to do more thorough internal investigations.

“It could be that the government’s expectation and, really, demand of what internal investigations look like are going to be bigger, broader, more expensive, more time-consuming,” Lawler said.

That change could also serve as a disincentive for companies to cooperate, especially if there’s confusion about how much they’ll be credited for, said James Koukios, a former Justice Department fraud prosecutor.

“We have to meet this expectation of cooperation, but what if we have a difference of opinion with you about whether we’ve cooperated?” he said. “Does that mean we actually get nothing?”

The department also is directing its civil and criminal lawyers to work together on corporate investigations and to begin with a focus on individuals. The department will generally not agree in corporate settlements to shield individuals from criminal or civil liability, according to the memo, and should pursue civil cases against individuals even if they don’t have the ability to pay a judgment against them.

The guidance, issued months into the tenure of Attorney General Loretta Lynch, acknowledges the difficulties prosecutors have had in making cases against executives. Those include identifying people who had knowledge of the crime and involvement in it, gathering the cooperation and testimony of witnesses overseas and reconstructing a complicated paper trail.

“Without an inside cooperating witness, preferably one identified early enough to wear a wire, investigators are left to reconstruct what happened based on a painstaking review of corporate documents, looking for a smoking gun that most financial criminals are far too savvy to leave behind,” Yates said.

Still, the policy shift appears aimed at turning the page from some of the criticism that dogged her predecessor, Eric Holder, in the aftermath of the worst economic downturn since the Great Depression.

Public advocacy groups and other watchdogs have long expressed frustration that the Justice Department didn’t do more to hold executives accountable for the mortgage crisis. The department at least partially sought to address those concerns in the last two years with a series of multi-billion-dollar civil settlements with Citigroup, JPMorgan Chase and Bank of America.

The department’s signature criminal case against a financial institution in the last year or so, an $8.9 billion penalty against French bank BNP Paribas for sanctions violations, did not result in criminal charges against individuals.

Survey: US More Competitive Globally, But Inequality a Risk