Survey: US More Competitive Globally, But Inequality a Risk
Advertisement 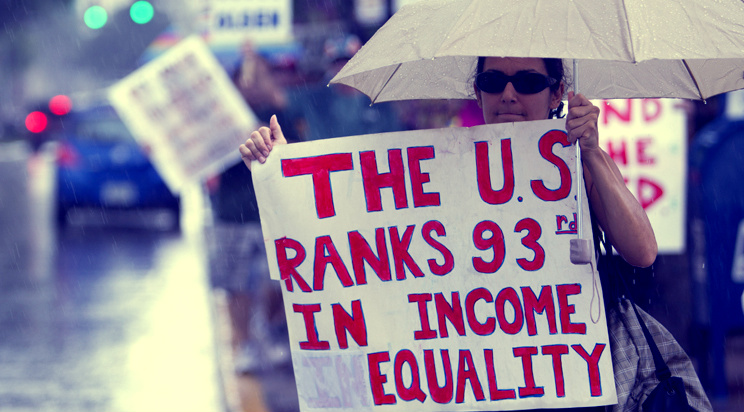 WASHINGTON (AP) — Income inequality will remain a persistent problem despite brighter prospects for U.S. companies globally, according to an annual survey of Harvard Business School alumni.

Fifty-eight percent of the respondents said they thought the U.S. economy would either become more competitive or at least hold its ground against other countries over the next three years, a marked improvement from 2011 when just 29 percent felt that way.

But only about a third of respondents said they expected companies to be able to increase pay and benefits for workers. The wealth disparity alarmed many of the surveyed executives, with 45 percent saying that rising poverty levels could hurt their businesses. The respondents said they worry about the growing concentration of wealth among a sliver of the population, but they appear uncertain of how to reduce inequality.

Some companies have tried to remedy the problem with pay raises. Others fear resistance from shareholders whose stock holdings might lose value if higher salaries raise costs and erode profits.

“There is a gap between ‘I don’t think the system is working’ and ‘I don’t know what to do to fix it,'” said Jan Rivkin, a professor of business administration at Harvard and co-author of the survey report.

The respondents suggested that greater economic inequality could ultimately reduce demand for their products, hurt social stability, make it harder to acquire skilled workers and provoke a backlash against successful companies.

The results could help to move the debate about inequality “from a clash between the haves and have-nots to a question of how can we be better,” because many of those near the top of the income distribution recognize the problem, Rivkin said.

The findings come at a pivotal moment for the global economy, with the United States outshining most other industrialized nations. With its 5.1 percent unemployment rate and steady job growth since early 2014, “the U.S. economy is the most robust economy in the world,” said Gregory Daco, head of U.S. macroeconomics at the consultancy Oxford Economics.

China, the second-largest economy, has suffered a sharp slowdown, provoking a chain reaction of tumbling stock markets around the world over the past month. Other emerging economies, such as Brazil, are struggling. And Europe remains mired in high unemployment and sluggish growth.

American “business leaders have figured out the hidden costs of operating in emerging economies, and that makes the United States look more attractive,” said Rivkin, noting that faster product cycles mean that companies must be closer to their domestic customers and that wage inflation in emerging nations has increased operating costs.

U.S. incomes have yet to fully rebound more than six years into the recovery from the Great Recession. The median household income was $55,132 in June, still 2.7 percent below its pre-recession level in December 2007, according to Sentier Research.

Finding ways to narrow inequality, such as increased investment in education, should be a priority, according to the 2,716 Harvard alumni in the survey. When asked to choose among priorities, two-thirds selected problems related to the wealth gap: Income inequality, middle-class stagnation, economic mobility or poverty. A third of the respondents said the focus should instead be on improving overall economic growth.

This story has been corrected to show that the number of survey respondents was 2,716, not 2,076.