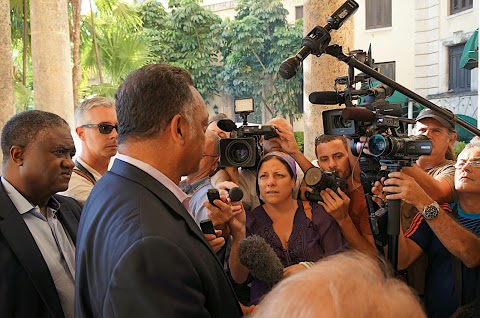 Jesse Jackson was eager to talk to the media after secret talks (Photo by Butch Wing, RainbowPUSH).

HAVANA, Cuba (NNPA) – Jesse Jackson was ensconced in his 6th floor suite at Hotel Nacional, at the end of the hallway, as the four people he had invited to accompany him to Cuba – James Gomez, Director of International Affairs for the Rainbow PUSH Coalition; Lyle “Butch” Wing, the organization’s National Political Coordinator; Brewster McCauley, Jackson’s Chicago-based videographer, and this reporter – walked back and forth between the lounge and their rooms on the same floor.

Gomez and I were in the lounge discussing the utility of his iPhone charging case when a member of the local ministerial group hosting us rushed from an elevator and excitedly told Gomez, “They are here!” Gomez quickly went downstairs, returned about 10 minutes later and let everyone know it was time to move – quickly.

We all knew “they” were members of FARC-EP, the Spanish acronym for Revolutionary Armed Forces of Colombia – the People’s Army, a guerrilla group that has been fighting to overthrow the government since 1964. Gomez had been in close contact with the rebels for nearly two weeks. But once we landed in Havana after a 45-minute mid-afternoon charter flight from Miami, neither of the phones Gomez or Wing uses for international travel worked. Internet service in the hotel, when you could get on line, was maddeningly slow. A member of the Cuba council of churches, the group that had invited Jackson to Havana, offered the use of his phone to contact the rebels. But Gomez politely declined, thinking it wouldn’t be wise to make the group’s cellular telephone number available to others without their permission.

Shortly after 8 p.m., five hours after our arrival, “they” were in the hobby of Hotel Nacional. After sizing up the loud, crowded hotel lobby, a member of FARC decided the hotel wouldn’t be an ideal meeting spot. We stepped out of the front door, the FARC member signaled the driver of a van parked about 30 yards away to pull into the narrow, circular driveway and we all climbed into the vehicle. Sitting three rows back, on the driver’s side, was Pablo Catatumbo, a/k/a Jorge Torres Victoria, a member of FARC’s high command, called the Secretariat of the FARC-EP.

Jesse Jackson slid in next to him and the two talked as we rode to a secluded compound less than 30 minutes from central Havana. When we arrived, the driver flicked his lights twice and two armed guards stared at the van intently as the metal gates slowly eased open to allow our passage. After riding several minutes through a neighborhood within a neighborhood, we unloaded at a large, stately house that had once belonged to the Cuban elite.

Inside, several people greeted us, including Ivan Marquez, a/k/a Luciano Marin Arango, also a member of the Secretariat of the FARC. Before long, the FARC contingent had grown to nine, including a female interpreter who moved to Colombia about a decade ago from the Netherlands and former Colombian Senator Piedad Cordoba.

In 1999, the paramilitary group United Self-Defense Forces of Columbia (AUC), kidnapped Cordoba. She was freed after several weeks and exiled to Canada. A year later, she returned to Colombia, became a strong supporter of FARC, and has been instrumental in several prisoners’ releases.

Upon her entrance, Jackson fell to one knee as if he were paying respect to royalty. She persuaded Jackson to get up just as quickly as he had gotten down and everyone in the room erupted into laugher.

Everyone knew the matter at hand – turning over a captured American, Kevin Scott Sutay, to Jackson – was no laughing matter.

Two weeks earlier, while in Colombia to attend a world conference of mayors of African descent, Jackson let it be known that he was interested in meeting with the rebels to discuss several issues, including Sutay’s possible release. They sent word for him to come to Cuba, where they have been participating in peace talks with Colombian officials since last November. Jackson accepted the invitation, which led to the meeting on Sept. 27.

Before discussing Sutay, who is often referred to as Kevin Scott, the leftist rebels provided an overview of their 50-year freedom struggle. Uppermost on their minds was the issue of land reform. In the 1960s, the Colombian government began subsidizing large private farms, many of them formed by displacing small farmers. By 1969, an estimated 400,000 peasants had been uprooted from their land. FARC and other rebel groups, who together control about a third of the country, sided with the peasants and have engaged in an armed struggle to oust various administrations for nearly 50 years.

According to the U.S. government, FARC has funded its revolution by extracting ransom for kidnappings and the production, distribution and taxing of illicit drugs. Because of their alleged involvement in the Colombia-U.S. drug trade, the State Department has put a bounty on the two high-ranking leaders meeting with Jackson this night – $2.5 million for information leading to the arrest and conviction of Catatumbo and $5 million for the arrest and conviction of Marquez.

FARC controls about 190,000-square miles of the southeastern region of Colombia, mostly a thick jungle. That’s where Sutay was captured on June 8 after hiking through Mexico, Honduras, Costa Rica, Nicaragua, Panama, and Bogota.

Jackson repeatedly said in the meeting that the issue of land reform was a legitimate one and that rebels could broaden support for their cause by releasing Sutay as a humanitarian gesture. Jackson said that single act would cause people around the world to look at FARC in a different light.

Marquez praised Jackson’s long record of successful humanitarian missions and said FARC was willing to turn Sutay over to him unconditionally. Because former senator Piedad Cordoba is the daughter of an Afro-Colombian father and a White mother, Jackson thought for aesthetics as well as other reasons, it would be good to include her in the high-profile process.

However, the brown-skin attorney and former legislator declared that President Juan Manuel Santos was certain to object to her involvement and advised leaving her out of the appeal to the Colombian government for cooperation.

Jackson pressed the rebels to release Sutay to him immediately, saying he was prepared to fly to Colombia the next day. But FARC leaders reminded him that any successful release would require the following of certain protocols as well as cooperation from President Santos, the country’s former military chief.

Pablo Catatumbo carefully explained that Sutay was being held deep in the jungle and in order to bring him out, the Colombian government would have to agree to a ceasefire for a specified time – something that had to be clearly communicated to the field – and a properly identified International Red Cross helicopter would also be part of the rescue effort.

In order to not disclose the location of their fighters in the jungle, Catatumbo said, the Red Cross helicopter would be airborne before FARC would provide the coordinates to where Sutay would be picked up and flown to safety. The rebels would also need time to safely retreat from the area.  Coordinating these actions takes time, usually a minimum of four or  five days, and a mistake at any point could doom the mission, he said.

Once the danger of the rescue mission was absorbed, the discussion turned to publicizing FARC’s decision to release Sutay to Jackson as a humanitarian gesture. The decision was made for former senator Piedad Cordoba to release a statement at 9 a.m. the next day applauding FARC’s decision to release Sutay and saying she would not be a part of the process because she did not want to be an impediment to Sutay’s release. FARC agreed to issue a statement an hour later announcing that it would unconditionally release Sutay to Jackson.

With the announcements set for the next day, the 3-hour meeting ended and we were driven back to the hotel around 11 p.m.

Saturday morning was filled with anxiety for Jackson, who observed members of the press camped out at the hotel awaiting word on his next move. But Jackson couldn’t say anything to the media until it had been confirmed that the two statements had been issued.

Senator Cordoba’s statement wasn’t released until around 10 a.m. Jackson had a staffer check several times to see whether FARC had released its statement and it hadn’t. Jackson’s delegation left the hotel around 11:30 a.m. for lunch at a local restaurant. An hour later, the statement still hadn’t been issued and there was an obvious shift in Jackson’s mood. Normally, Jackson loves  banter, joking and talking. And he loves talking to the media as much as anything else. Having covered him for nearly four decades, including his 1984 presidential campaign, I have always said the most dangerous place in the world is standing between Jesse Jackson and a television camera.

In the restaurant, Jackson grew sullen, sitting in a chair off to himself, saying very little. However, when news came around 2:30 p.m. that FARC had issued its statement, the old, playful, energized Jesse Jackson quickly returned. After a brief stop at an office to see the English translation of FARC’s statement, we headed back to the hotel where Jesse Jackson held court in the courtyard near the ocean.

“We accept this obligation and opportunity to render service to Kevin Scott, his family and our nation,” Jackson told reporters.

Late Saturday night, the BBC reported that Santos had rejected the offer to help Jackson retrieve the American veteran.

Santos tweeted, “Only the Red Cross will be authorised to arrange for the handover of the North American kidnapped by the FARC. We will not allow a media spectacle.”

Except for Sutay and his family, no one was more despondent than Jackson.

True, he craves media attention. Equally true, however, is that he recognizes that he has a unique ability to bring back dozens of Americans captured around the world when government-to-government efforts fail. In the past, he has persuaded the government holding prisoners to release them to him. In this instance, a third party rather than a government is holding an American prisoner. And this time, Jackson says the pressure has shifted from him to the U.S. government to make sure Kevin Scott Sutay, a Navy veteran who fought in Afghanistan, returns home safely.

“An American veteran has been captured and accused of being a terrorist when, in fact, he was a tourist,” Jackson said in an interview with the NNPA News Service. “I have been given permission to get him, but I can’t bring him home by myself.”