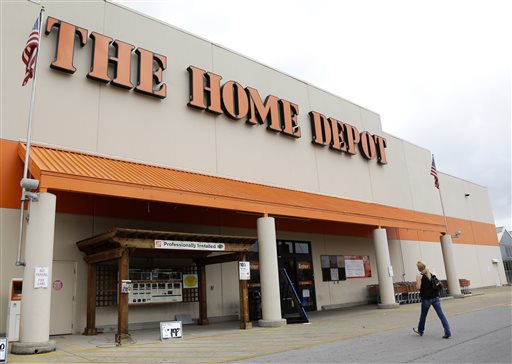 In this Aug. 14, 2012 file photo, a customer walks toward a Home Depot in Nashville, Tenn. Home Depot on Monday, Sept. 8, 2014 confirmed that its payment systems have been hacked in a data breach that could affect millions of shoppers who used credit and debit cards at its more than 2,000 U.S. and Canadian stores. (AP Photo/Mark Humphrey, File)

NEW YORK (AP) — Shares of Home Depot sank before the opening bell Tuesday after confirming that its payment systems had been hacked, potentially exposing millions of shoppers who used credit and debit cards at its more than 2,000 U.S. and Canadian stores.

The breach could turn out to be one of the biggest in history. Home Depot did not say how many cards might be affected, but the largest U.S. home improvement chain did say late Monday that its investigation into the breach goes as far back as April.

The news comes nearly a week after a website that focuses on cybersecurity reported on Tuesday a possible hack of Home Depot’s data. The company said later that day that it was investigating the potential breach.

“We apologize for the frustration and anxiety this causes our customers, and I want to thank them for their patience and support as we work through this issue,” Chairman and CEO Frank Blake said in a press release.

Home Depot is the latest retailer to have a data breach. Others include Target, luxury retailer Neiman Marcus, grocer Supervalu, restaurant chain P.F. Chang’s and the thrift store operations of Goodwill.

In December, Target Corp. disclosed a massive data breach that was the second-largest in history, resulting in the theft of 40 million debit and credit card numbers and the potential exposure of personal information of up to 70 million shoppers.

Forrester Research analyst John Kindervag said the Home Depot breach could affect similar numbers of shoppers or cards, noting that months’ worth of data may have been compromised.

“From what I’m hearing, people think this will be as big as Target or bigger,” he said in a telephone interview with The Associated Press.

The retail breaches have rattled shoppers’ confidence at a time when privacy concerns are high. It’s also increased pressure on retailers to increase security so that customers can feel safe that their personal data is secure when they’re out shopping.

Retailers, banks and card companies have responded to the breaches by speeding the adoption of microchips in U.S. credit and debit cards. That technology helps makes transactions more secure.

Home Depot, which said malware was used in the hack, has announced that it plans to have chip-enabled checkout terminals at all of its U.S. stores by the end of this year.

In the meantime, the Atlanta company said its IT department also is looking into the breach and is working with outside firms, its banking partners, and the U.S. Secret Service. It added that customers will not be held responsible for fraudulent charges to their accounts.

The possible breach at Home Depot was first reported by Brian Krebs of Krebs on Security. Krebs said multiple banks reported “evidence that Home Depot stores may be the source of a massive new batch of stolen credit and debit cards.”

If Target’s breach is any indication, the fallout from the Home Depot breach could be severe.

The Target hack cost the company hurt the company’s profit and revenue. Target’s chief information officer and CEO both stepped down in the months after the hack.

“I would think if you’re a member of the board of directors, somebody has to be the sacrificial lamb for this,” Kindervag, the Forrester analyst, said about Home Depot’s breach.

Home Depot already has had some fallout. Its shares fell 41 cents to $90.41 in premarket trading Tuesday.

Before the potential breach was announced, Home Depot said in August that Blake would step down as CEO on Nov. 1. He will be replaced by Craig Menear, president of the company’s U.S. retail operations.

[Home Depot fell $1.89, or 2 percent, to $88.93 after the home improvement chain said hackers had broken into its in-store payment systems.]

LeBron James: The Next Warren Buffett?