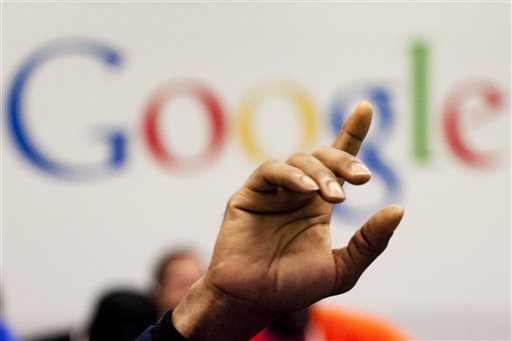 In this Oct. 17, 2012, file photo, a man raises his hand during at Google offices in New York. People should have some say over the results that pop up when they conduct a search of their own name online, Europe’s highest court said Tuesday, May 13, 2014. (AP Photo/Mark Lennihan, File)

MOUNTAIN VIEW, Calif. (AP) — Google is planning to release statistics documenting the diversity of its workforce for the first time amid escalating pressure on the technology industry to hire more minorities and women.

The numbers are compiled as part of a report that major U.S. employers must file with the Equal Employment Opportunity Commission. Employers, though, aren’t required to make the information publicly available.

Google Inc. had resisted previous calls for it to share the diversity data.

David Drummond, an African-American executive who oversees Google’s public policies, announced the about-face Wednesday during the company’s annual shareholders’ meeting at its headquarters in Mountain View.

“Many companies in (Silicon Valley) have been reluctant to divulge that data, including Google, and, quite frankly, we are wrong about that,” Drummond said. He said the information will be released next month.

The concession came after the Rev. Jesse Jackson appeared at the annual meeting to urged Google to lead the effort to hire more African-Americans, Latinos and women in technology. The longtime civil rights leader applauded Google for its transparency.

Other technology companies also are expanding their payrolls as demand for their devices and online services steadily increases, but Jackson and other critics contend the industry isn’t doing enough to ensure their workforces are as diverse as the rest of society.

About 7 percent of tech workers are black or Latino, both in Silicon Valley and nationally. Blacks and Hispanics make up 13.1 and 16.9 percent of the U.S. population, respectively, according to the most recent Census data.

Although lots of women work for tech companies, relatively few are in higher-paying technical or executive positions.

Drummond assured Jackson that Google is committed to getting more minorities and women into top tech jobs. “We are not doing enough and we can do a lot better,” Drummond said.

Google Executive Chairman Eric Schmidt also said the company plans to look for women and minority candidates when there is another opening on its board of directors. There are currently three women and a native of India on Google’s 10-member board.