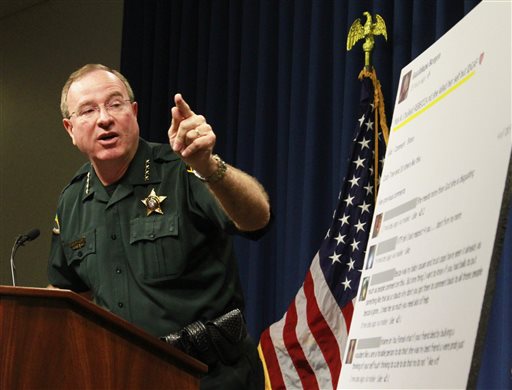 In this Sept. 10, 2013 file photo, Polk County Sheriff personnel investigate the death of 12-year-old girl, Rebecca Ann Sedwick, at an old cement plant in Lakeland, Fla. Two girls have been arrested in her death. Officials say she committed suicide after being bullied online for nearly a year. On Tuesday, Oct. 15, 2013 Polk County Sheriff Grady Judd will announce charges against the girls, age 12 and 14, in a press conference. (AP Photo/The Lakeland Ledger, Ernst Peters, File)

ST. PETERSBURG, Fla. (AP) — When two girls, aged 12 and 14, were arrested in a bullying-suicide investigation in Florida, many wondered: Where were their parents and should they be held responsible?

The mother and father of the older girl went on national TV and defended their daughter — and themselves. They said they often checked their daughter’s social networking activity and don’t believe their daughter bullied Rebecca Sedwick to suicide, as authorities have charged.

Whether or not you believe the family, experts say parents should use Rebecca’s case to talk to their children.

“Sit down and say, ‘I know most kids won’t tell their parents, but tell me what you would want from me if you were being cyberbullied,'” said Parry Aftab, a New Jersey-based lawyer and expert on bullying.

She advocates a “stop, block and tell” approach. “Don’t answer back, block the cyberbully online and tell a trusted adult,” Aftab said.

In Rebecca’s case, she did talk to her mother about the bullying and even changed schools, yet the tormenting continued online, authorities said. About a month ago, Rebecca decided she couldn’t take it anymore and jumped to her death at an abandoned concrete plant.

It was a Facebook comment over the weekend that Polk County Sheriff Grady Judd said led him to arrest the girls. He repeated the online post from the older girl almost word for word at a news conference Tuesday.

“‘Yes, I bullied Rebecca and she killed herself but I don’t give a …’ and you can add the last word yourself,” Judd said.

The sheriff was aggravated the girl’s parents allowed her access to social networks after Rebecca’s death and said he made the arrest so she wouldn’t bully anyone else.

In an interview with ABC News that aired Wednesday, the 14-year-old’s parents said their daughter would never write something like that and the girl’s Facebook account had been hacked, a claim police don’t believe.

“My daughter don’t deserve to be in the place she’s in right now and I just hope that the truth comes to the surface so we can get out of this nightmare,” her father told ABC News.

A day earlier, he told The Associated Press by phone: “My daughter’s a good girl and I’m 100 percent sure that whatever they’re saying about my daughter is not true.”

The girls were charged as juveniles with third-degree felony aggravated stalking. The sheriff said even if they are convicted, they probably won’t spend time in juvenile detention because they don’t have a criminal history.

He identified the girls and showed their mug shots during the news conference, but AP generally does not name juveniles charged with crimes.

Police also considered charging the parents, but so far can’t prove complacency or that they knew about the bullying, sheriff’s spokesman Scott Wilder said Wednesday.

Authorities said about a year ago, the bullying began after the 14-year-old girl started dating Rebecca’s ex-boyfriend. The older girl threatened to fight Rebecca while they were sixth-graders at Crystal Lake Middle School and told her “to drink bleach and die,” the sheriff said. She also convinced the younger girl to bully Rebecca, even though they had been best friends.

Judd said the younger girl had shown remorse while the older one was “very cold, had no emotion at all upon her arrest.”

The younger girl’s father told ABC News he wished he could have done more.

“I feel horrible about the whole situation,” he said. “It’s my fault, maybe that I don’t know more about that kind of stuff. I wish I did.”

He did not return a telephone call from AP.

David Tirella, a Tampa attorney who has represented the families of bullying victims in lawsuits against schools, said the publicity over Rebecca’s case and the charges may further awareness in a way that few cases have in the U.S.

“Victims are being empowered, families are talking about it,” said Tirella, who is also a Stetson University law professor. “We took a big step forward in Florida to help protect victims.”