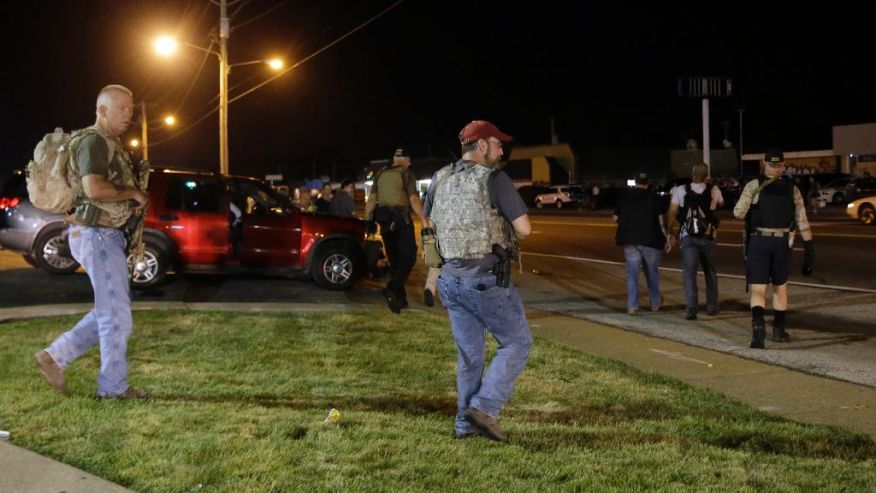 Heavily armed civilians with a group known as the Oath Keepers arrive in Ferguson, Mo., early Tuesday, Aug. 11, 2015. The far-right anti-government activists, largely consists of past and present members of the military, first responders and police officers. (AP Photo/Jeff Roberson)

FERGUSON, Mo. (Gawker) — The Oath Keepers in Ferguson just lost their highest-profile member. Sam Andrews, who led armed members of the militia-style group into protests following Michael Brown’s death and its one-year anniversary, quit in characteristically loud fashion amid a verbal war with the group’s founder this week, citing what he called a “racist double standard” within the Oath Keepers.

Andrews’ spat with the Oath Keepers follows his announcement that he plans to hold a march in conjunction with black protesters in Ferguson during which marchers would legally carry guns in a symbolic showing of force against the police. Like most Oath Keepers, Andrews is a fierce believer in the Second Amendment. Where he may diverge from the orthodoxy of the group—which is mainly composed of ex-members of the military and law enforcement agencies—is his belief that residents of Ferguson and similar communities should arm themselves to combat oppressive police forces.

Whites Quit Working With Black Mississippi Judge, Then He Got Sacked