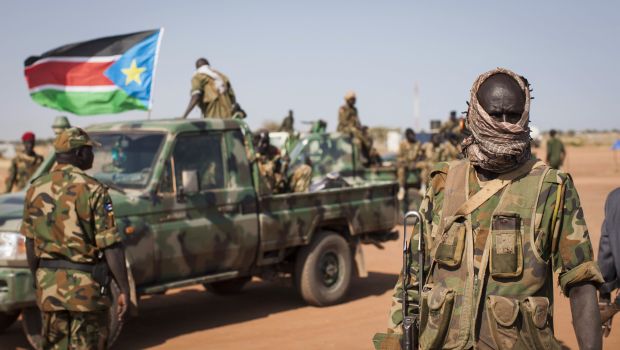 A South Sudanese government soldier stands with others near their vehicles, after government forces on Friday retook from rebel forces the provincial capital of Bentiu, in Unity State, South Sudan, Sunday, Jan 12, 2014. (AP Photo/Mackenzie Knowles-Coursin)

The Intergovernmental Authority on Development, a seven nation bloc, accused South Sudan’s government and rebel forces of failing to honor accords signed on Jan. 23, May 6 and May 9 and said they should “immediately” implement them. IGAD also urged both parties to allow humanitarian workers unhindered access to areas of the country affected by conflict.

Member states will take “further collective action to pressure any party who fails to honor its commitments,” the bloc said in an e-mailed statement today after a summit of regional leaders in the Ethiopian capital, Addis Ababa. That action may include the “imposition of punitive measures.”

Conflict erupted in the oil-producing country on Dec. 15 after President Salva Kiir accused his former deputy Riek Machar of plotting a coup, a charge Machar denies. Thousands of people have been killed in the fighting and more than a million have been forced to flee their homes, according to the United Nations. Both government and rebel forces have reported clashes even after Kiir and Machar agreed to cease hostilities.