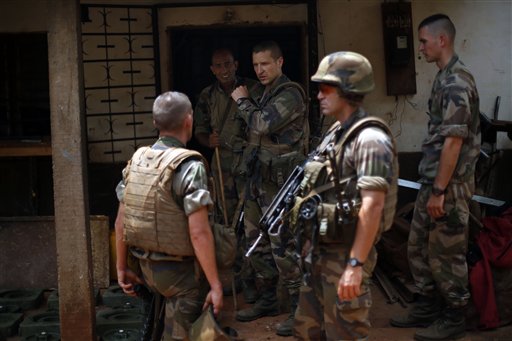 French soldiers search a house used as an armed cache in the Christian sector of PK12, the last checkpoint at the exit of the town, in Bangui, Central African Republic Tuesday Feb. 11, 2014 (AP Photo/Jerome Delay)

The latest clashes erupted after villagers in Liwa, located 10 kilometers outside of the central town of Bambari, killed two Muslim men on a motorcycle on Monday, residents said. In response, fighters descended on both Liwa and Bambari, throwing grenades and burning more than 100 houses, said Bambari resident Nono Azoundja. After taking four people hostage, the fighters quickly executed two of them in front of the Bambari courthouse, which Seleka leaders have been using as a headquarters, Azoundja said.

French and African forces had arrived in Liwa to restore calm and conduct an investigation, he said.

Some of the fighters were affiliated with the Seleka rebel coalition that overthrew then-President Francois Bozize in March 2013, triggering the country’s latest slide into turmoil.

Seleka leader Michel Djotodia became transitional president, but he was forced to resign in January amid mounting international outrage over human rights abuses committed by the rebel fighters.

Christian militias have since sought revenge for atrocities committed during Djotodia’s rule. The sectarian violence has left thousands dead and forced nearly 1 million people to flee their homes.

Around 2,000 French troops and nearly 5,000 African peacekeepers are trying to stabilize the country. In April the U.N. Security Council authorized a nearly 12,000-strong peacekeeping force to bolster the troops already in the country to protect civilians, though the U.N. force is not expected to be operational until September.

Bambari had until recently been spared the worst of the fighting. However, French forces fired mortars and exchanged sustained gunfire with Muslim rebels there in an altercation last month that raised concerns former Seleka members may be gaining strength.

Earlier in May, hundreds of ex-Seleka fighters gathered to choose Gen. Joseph Zindeko as their new leader and described plans to create a political wing.

The latest violence in Bambari coincided with a statement from interim President Catherine Samba-Panza’s government saying it had officially requested the International Criminal Court to investigate crimes under its jurisdiction committed during the conflict.

Prosecutor Fatou Bensouda had already announced a preliminary investigation into potential war crimes or crimes against humanity back in February, saying the crisis had “gone from bad to worse” since last year.